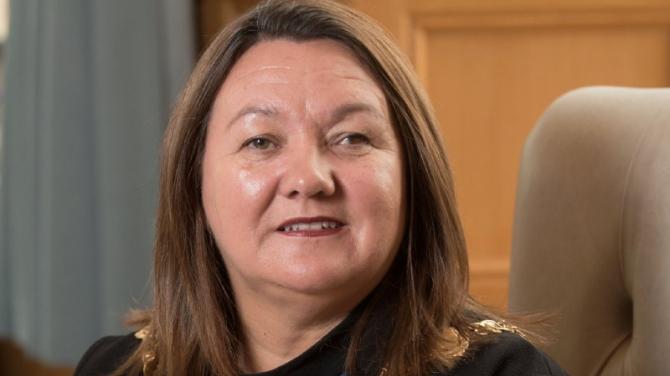 THE Mayor of Derry City and Strabane District Council, Michaela Boyle, who was left blind in one eye as a child because of dog fouling has supported calls for a more proactive approach to address the problem.

The Strabane politician was speaking at Thursday’s full meeting of council where members were unanimous in their support for tougher measures to catch irresponsible dog owners who allow their pets to foul in public.

“I’m probably the most qualified person in this chamber to speak on this issue,” she said. “As a young girl of five years of age I lost the sight of my left eye due to toxicara/toxoplasmosis which is the infected worms that you get through dog fouling. So, that’s the reason I’m blind in my left eye. I know all too well the serious implications that dog fouling has.

“When I was a councillor on the old Strabane council, this is something that I was very passionate about.

“I wanted council to run with a marketing campaign at the time. It didn’t happen and I was very disappointed because a lot more can be done.

“It is an educational issue in terms of making sure that people within the community are well aware of it.”

Mayor Boyle said there is also an issue about the under-reporting of dog fouling incidents.

“The majority out there of dog owners are responsible but there are those who still allow their dogs to foul and there are hot-spot areas in Strabane and across the district. We, as a council, should be doing more.”

She added: “We do need to look at this in terms of a marketing campaign. We do need the buy in of the community and we do need better reporting of incidents as well.

“The majority of dog fouling happens very early in the morning or late at night when people are walking their dogs. It’s hard to police because of that.

“I think that’s where it needs to be – a marketing campaign be that through print media, social media or TV advert. It’s a very, very serious issue for those that have been affected particularly when it comes to children.”