Delight as work to begin on Newtownstewart play park 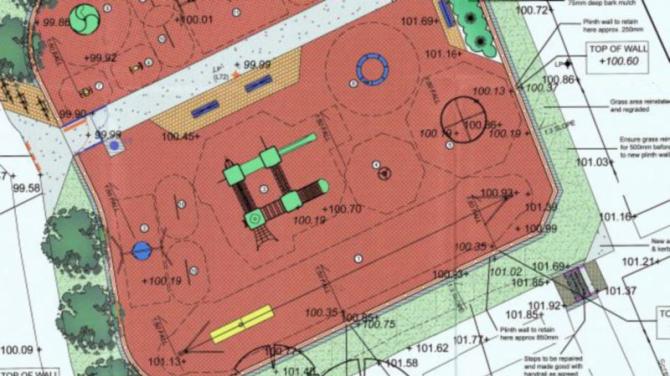 WORK on a long-awaited new children’s play park in Newtownstewart will begin next week it has been confirmed.

Derry City and Strabane District Council has confirmed that contractors have been appointed to progress the scheme and work is to commence on February 17.

The park will be located at a site adjacent to Mourne Park and Mourne Walk with the new facilities aimed at promoting social interaction and physical activity among children and young people in the area.

The equipment will include a multi-unit with towers, climbing nets and slides, a wheelchair accessible ground-flush roundabout, swings with adapted inclusive swing seats, toddler swings, basket swings, ziplines and much more.

With a price tag of £350,000, news that the state-of-the-art play area is coming to fruition marks the culmination of a tireless campaign by the local community.

Residents and community groups in the town had been pushing for a play area for children in the area following the removal of the central park more than 20 years ago.

A park had been located in Mourne Park but had to be removed because of ongoing vandalism issues and was never replaced.

The family of a local girl who died following a sewage plant accident have been leading the charge for the play park alongside local community groups.

Joanne O’Doherty and Amanda McConomy lost their eight-year-old sister, Nicole, in the tragedy in 1994 due, they believe, to the lack of playing facilities in the vicinity.

Nicole had been playing with friends when she entered the sewage treatment plant to a retrieve a ball.

She slipped, falling off an inspection walkway and drowned. Her family are adamant that the provision of a proper and safe play facility in the town could have prevented her death.

They have been pressing for the installation of a proper play park for the children of the town since their sister’s death and now thanks to their campaigning, the town will finally see the area get its new park in the near future.

Amanda McConomy, who is also a local community representative in the town, has welcomed news of the imminent works.

“I’m delighted and really over the moon that works will be starting this month on the new play park,” she said.

“Importantly, these state-of-the-art facilities will provide a safe play area for local children of all ages and abilities to enjoy.

“I’ve also no doubts that the new park will act as a focal point for children to play and forge new friendships – whilst also ensuring they remain healthy and active.”

The new play facility will be delivered by council with support from funding allocated by Derry and Strabane Rural Partnership under Priority 6 (LEADER) of the Northern Ireland Rural Development Programme 2014-2020.

The work will be undertaken by contractor TD McKane & Son with a view to reaching completion by autumn 2020.

Mayor of Derry City and Strabane District, councillor Michaela Boyle, says the facility will be an excellent facility for families and children in the town to visit and enjoy the outdoors.

“This is great news for the people of Newtownstewart and will bring significant benefits to the entire local community in terms of leisure and play provision,” she said.

“This exciting project is also reflective of council’s ongoing commitment to support investment in parks and sports facilities throughout the city and district. The new development will also play a key role in promoting social interaction and physical activity among our children and young people.”

Sinn Féin colleague Kieran McGuire who has also worked to secure the facility for the area paid tribute to the McConomy family’s resolve.

“The facility which will include zip lines, swings and roundabouts will provide a positive and healthy recreational outlet for children and families in the area.

“With work on the ground at last commencing the sterling efforts of local community to secure this facility are at last coming to fruition.

“I would like to pay particular tribute to local woman Amanda McConomy who has been to the fore of the campaign to secure this facility for Newtownstewart,” he said.

Newtownstewart was identified by Derry and Strabane Rural Partnership as a strategic Village Renewal Project with £202,865 in grant funding set aside for the new play park.

Mary Hunter, chair of Derry and Strabane Rural Partnership said: “The allocation of this funding by the Partnership will help to create a brand new play resource for the children of Newtownstewart, providing them with a space to engage, interact and play.

“The project also contributes towards our core aims under the Village Renewal scheme to revitalise and bring vibrancy back into our rural communities enabling them to grow and prosper.”