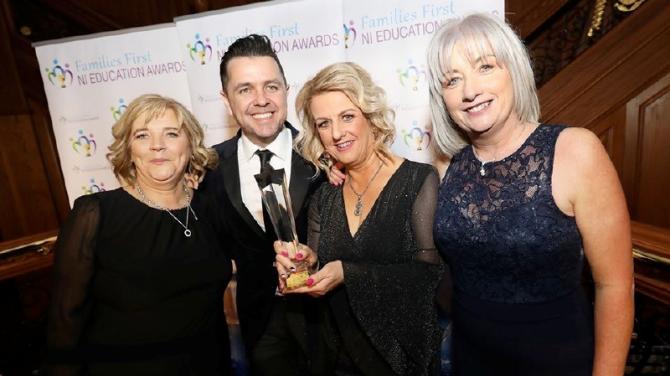 SCHOOLS across the district are celebrating this week following their successes at the annual Families First Awards.

The NI Education Awards – which aim to recognise and honour educators who help make family life that little easier or more special – were held on Friday night in the plush surroundings of Titanic, Belfast.

A number of schools and staff from across the district were in the running for accolades which are decided on a county by county basis and are based on a public vote via the Families First website.

Mrs O’Kane, who has worked at the school for a number of years, said: “From a very young age I was blessed with positive learning experiences, memories and opportunities in education.

“There was no doubt that the seed to follow my vocation was planted in primary school.

“Through the love and support of my parents, teachers and peers, the seed grew and in my heart, I knew I wanted to do the same for others.

“I take each day as a chance to give every child a new opportunity to shine and nurture them to plant their own seeds in life, growing to meet their full potential.”

A spokesperson for the school said the entire school community is “so proud” of the popular teacher.

“Well done to all teachers, school staff and all involved in education. Go Tyrone. Go Strabane," she added.

Also celebrating success are the staff of St Mary’s Primary School in the town who scooped the Gold Star Award for nurturing excellence in education.

And the success for local schools didn’t stop there with Donemana Primary School also bringing home an award.

Alex Parkhill, who has worked at the school for 18 years, brought home the award for ‘Best Complimentary Staff in Co Tyrone’.

“For 18 years Alex has worked one to one with children with additional needs. She has contributed enormously to their social and academic successes.

“She has a good sense of humour, is creative, adaptable and believes it is a privilege to work with our children. She approaches each day with a smile,” her nominator said.

At the NI Awards, nearly 500 individuals attended Titanic Belfast from all over the province and were entertained as soon as they entered the building at 6.30pm for a drinks reception until the lights were turned out at 1.30am.

Louise Coyle, from Eskra, provided the music during the serving of the four courses and a live band played a melody of popular tunes until the close.

Cool FM radio host, Pete Snodden was the emcee for the evening and presented the various school awards.