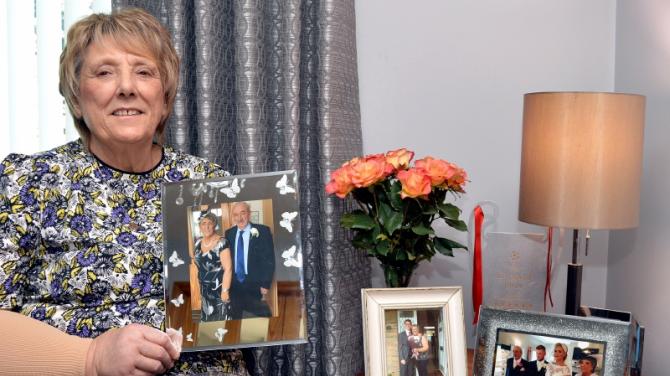 A CASTLEDERG woman honoured in the Queen’s New Year Honours has dedicated the accolade to her late husband.

Maureen Campbell was named as the recipient of a Member of the Order of the British (MBE) in the annual honours in recognition of her services to fostering in Tyrone.

Alongside her late husband Billy - who passed away in November – she has provided a loving home for dozens of children over the past 25 years.

During this period the couple have fostered a number of children from babies through to teenagers providing a caring and safe environment to them all.

One of the key things that Maureen and Billy offered all the children who came through their doors was a family and not just a home.

Speaking this week the local woman said she was “over the moon” to be bestowed with the prestigious honour but said it’s an accolade that wouldn’t have been possible without her late husband.

“I’m over the moon. I can’t believe it but I’m delighted. It’s a great honour. I found out that I got the award on November 16 just shortly after Billy passed away.

“Billy would have been delighted and it would have been lovely to have shared this with him. We were a team and I couldn’t have done any of it without him so I’m receiving this on behalf of my late husband too.

“I’m very honoured that someone thought that I should receive it. I haven’t a clue who put my name forward but I’m more than grateful to them. Everybody is over the moon for me and full of good wishes.”

Maureen said the couple began fostering for the Western Trust at a time of acute need in the area on August 23, 1994.

Over the years, 64 placements have come through the doors of the Campbell household with 20 children fostered on a long-term and short-term basis. In fact the couple went on to adopt one of the children, Shannon.

And, just weeks before his death, Billy took great pride in walking the first of their foster children, Charlene, down the aisle.

“We began fostering almost 26 years ago. Charlene was our first foster child and it was Billy’s proudest moment to walk her down the aisle just five weeks before he died. It was a very proud moment for both of us to see Charlene now married and with three of her own children.

“We didn’t have any family of our own but fostering has been very rewarding and we gained a family that we didn’t have.

“We adopted Shannon who was our second foster child and I see Charlene and my three grandchildren everyday. Any child who came through our door was treated like our own.

“When I told the family they were just delighted for me, it’s a great honour,” she said.

Billy passed away suddenly on November 2, last year, and Maureen admits the discovery that she was to receive the accolade is bittersweet.

Billy was a well-known and much loved local figure in Castlederg and beyond. The honour is an acknowledgement of the contribution both have made to the lives of a huge number of people in Tyrone.

“You don’t expect to be given such an honour and you don’t do things for awards but it’s nice to be recognised. Billy would have been so delighted and this is as much for him as it is me.

“It’s been a very sad first Christmas without him but I know he’d be so proud so I’d like to dedicate this award to him.

“I am now looking forward going over to London to receive the MBE. I will be taking Charlene and her husband with me and I also have a nephew in London so it means we’ll also be able to stop off with him too.

“It will be a nice day out and it’s something to look forward to,” Maureen added.