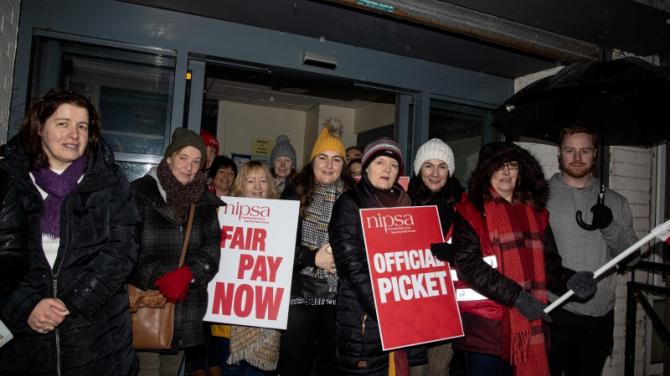 Details of the fresh phase of industrial action by nurses has been confirmed to take place on January 8 and 10 if pay parity is not introduced before then.

The announcement comes after nurses in Strabane joined thousands of their colleagues across Northern Ireland days before Christmas when they took strike action for the first time in history.

Nursing staff at Strabane Health Centre and the nearby Day Centre, alongside other health workers took to the picket line in a united call to address unsafe staffing levels and deliver pay parity with colleagues from across the UK.

It was the first time in over 100 years that members of the Royal College of Nursing (RCN) in Health and Social Care (HSC) services took strike action and they were joined by health care members from the NISPSA, Unison and Unite trade unions as well as paramedics who also staged a 24 hour walk-out.

RCN says it has sent notifications to the Department of Health and HSC employers of the next dates for strike action.

“We have written to the Secretary of State to say that we are extremely disappointed to learn of the failure of the health summit to produce any resolution to the safe staffing and pay parity issues that form the basis of our action. We are also disappointed to hear that attempts to negotiate an agreement leading to the restoration of the devolved institutions has failed.

“Although we wish to see political leadership and accountability in Northern Ireland restored, nurses deeply resent the link that is being made between this and resolving the crisis in health care. Sorting out this crisis is a priority regardless of our political situation, which has been in disarray for the past three years. We do not have another three years to wait.

“We wonder how much longer this inaction can continue before somebody, somewhere, can take a decision to rectify the problems we are facing?”

Full details of further industrial action by Unison members will also be announced later this week.

Patricia McKeown, regional sectary of Unison, whose members have been involved in action for four weeks, said that unions are currently making plans for further strike action in early January, the details of which will be announced on Friday.

Ms McKeown said there had been “overwhelming support” for staff from the public adding that union members had reaffirmed their determination to continue the campaign.

They are, she continued, angry that political parties with power to resolve the dispute have failed to do so, despite agreeing that their cause is just.

“The right of workers to pay parity and safe staffing levels cannot be dependent on the success or failure of political talks to restore devolution.

“We have repeatedly insisted that a mechanism to end this dispute already exists.

“The use of health workers as political leverage and the compliance of senior civil servants in that strategy is nothing less than shameful.

“Our members will continue to take industrial action in the form of a work to rule across the system and are currently making plans for further strike action in early January.

“Details will be announced on Friday, January 3. We hope that goodwill towards all health workers will prevail before then,” she said.