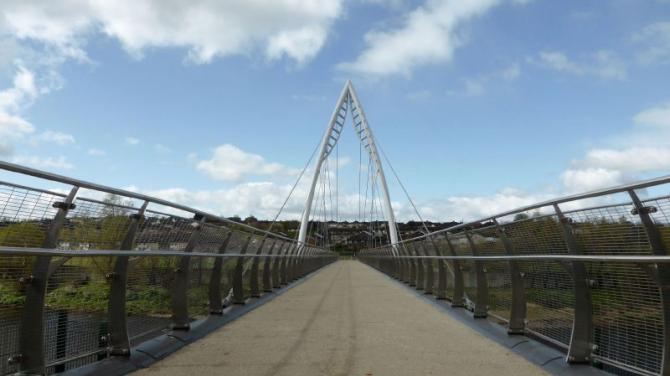 STRABANE’s Pedestrian Bridge will be opened temporarily over the Christmas period, council has confirmed.

The bridge, which links Ballycolman to the Head of the Town, was first closed prior to the Halloween break to “facilitate essential maintenance repairs” and had only been due to be closed for a week.

It re-opened temporarily for the Halloween celebrations but has been closed to the public since causing widespread frustration among local people who had been regular users of the facility.

Council has blamed the inclement weather conditions on the delay in completing the resurfacing works.

It also subsequently emerged that four years after it first opened, the bridge has not been paid for with the Department for Communities (DfC) confirming that a final payment to council remains outstanding.

A spokesperson for Derry City and Strabane District Council had previously said: “Contractors are working on site at the Strabane Pedestrian Bridge carrying out a range of final works that are necessary for the facility to be adopted by the relevant government department.

“The council however has been liasing with the contractors throughout this process to ensure the works are carried out to a high standard and completed as soon as possible.”

On Friday, council said the bridge will open over Christmas temporarily with the final set of maintenance works completed in 2020 – more two months after the structure first closed to the public.

A post on it’s social media pages confirmed: “The Strabane Pedestrian Bridge is set to reopen on a temporary basis this week and will remain open over the Christmas holidays.

“The final works on the bridge are scheduled to recommence in the New Year.”