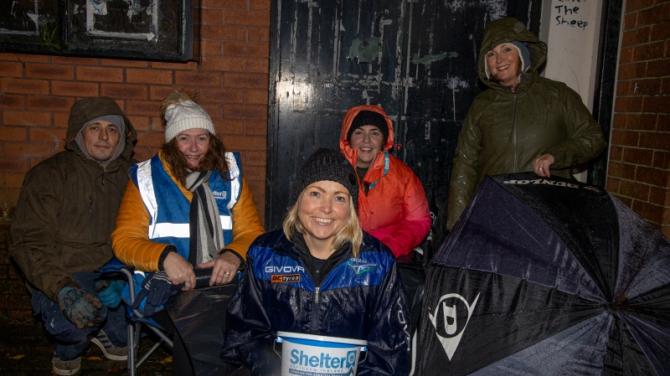 A GROUP of nine individuals have braved the bitter winter temperatures to raise awareness of the plight of homeless.

Following the success of last year’s event in Omagh, Shelter NI held its annual sleep-out on the streets of Strabane.

The initiative is part of the World’s Big Sleep Out, a global event calling for an end to homelessness.

The group endured the worst of the December weather in atrocious conditions however those taking part were very much aware that while they had homes to go to, for others they don’t have that choice.

Speaking afterwards, Ms Begley said: “I’m counting my lucky stars that I have a roof over my head to return to.

“I am lucky that I have the choice to sleep out, others are not as fortunate. Thanks to everyone who called with us during the night… Strabane is full of kind and good hearted souls.”

Mayor of Derry City and Strabane District Council, Michaela Boyle, who called to speak with the group paid tribute to the “fantastic bunch”.

She added: “Such a cold, blustery night. Thinking on those that have no choice but to call the street their home. Massive well done for braving the cold, wind and rain in support of the homeless plight.”

The Omagh sleep-out raised raised £7,000 and it’s hoped this year’s event will surpass that with donations still coming in.

Shelter NI, which is due to mark 40 years next year, has thanked all those who supported the event, all who donated and the businesses and local people who came along throughout the night with food, hot drinks and to provide moral support.

“Shelter NI firmly believes that everyone has a right to decent quality, affordable housing, that is not just a house but their home and we work tirelessly to try to achieve this.

“This appeal will help us to continue to provide housing services and advice throughout GABLE and SLATE projects which in the last financial year helped approximately 550 people.

“We believe tackling the stigma around homeless is part of preventing homelessness and our annual sleep out aims to raise awareness of homelessness issues and change the public's perception of homelessness for the better. Because we all benefit from a society were no one has to face being homeless,” a spokesperson said.

Donations can also still be made to the Strabane Sleep Out by contributing online at https://localgiving.org/appeal/