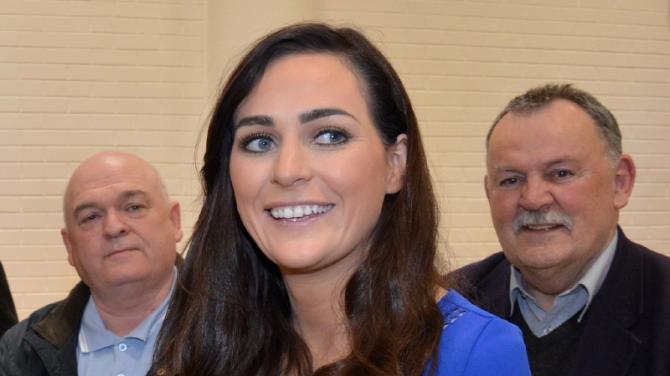 THERE was always going to be one winner in the West Tyrone constituency and as expected Sinn Féin retained its vice-like grip with Órfhlaith Begley comfortably securing her seat.

There were no surprises when just after 2am in the early hours of Friday morning at the count at Omagh Leisure Centre, deputy returning officer Peter Donaghey declared that the clear favourite had retained her seat.

Ms Begley, who was first elected in the 2018 by-election, cruised to the win with a 7,478 majority and saw an increase of 198 in her vote secured last year. She polled 16,544 votes in Thursday’s poll.

The Carrickmore woman said Brexit was “the issue of the day” on the doorsteps.

“This was a crucial election, the election of a generation and clearly people wanted their views heard in terms of Brexit.

“This is a border constituency that rejected Brexit in the referendum and people came out again in this election in their thousands to once again reject Brexit and Tory austerity,” she said.

Her nearest rival, the DUP’s Tom Buchanan was never in with a chance of unseating the Sinn Féin MP but he was pleased to have increased his vote from the by-election taking 9,066 votes (+676).

He said that if apathy within the unionist community was addressed and with a unionist unity candidate, it would be possible to take the seat.

While both Sinn Féin and the DUP enjoyed an increase in their vote from the by-election their overall percentage share was down when compared to their performances in the 2017 general election.

The results for the two ‘big’ parties replicated those across Northern Ireland with decreases in their overall vote share.

The DUP lost two of their ten seats. The loss of the party's leader in the House of Commons Nigel Dodds to John Finucane of Sinn Fein in North Belfast will have particularly hurt.

Sinn Féin retained seven seats but the Foyle seat was a high-profile casualty for the party with the seat going to the SDLP.

Now, for the first time ever Northern Ireland now has more nationalist MPs than unionist representatives.

Elsewhere, there were gains in the West Tyrone constituency for the SDLP and Alliance.

Whilst it was Sinn Féin’s election, the day also belonged to Alliance candidate Stephen Donnelly who saw his vote almost quadruple from his 1,000 tally in 2017’s general election to 3,979, putting the party in fourth place.

Given the surge in the vote Alliance will surely be confident of claiming an Assembly seat for West Tyrone in any potential election next year.

The Clanabogan man said his result was proof that people are beginning to buy into the “positive, progressive alternative” vision of his party.

Daniel McCrossan, SDLP, saw an increase in his vote, rising from 5,635 in 2017 to 7,330 at this election making it his highest vote in the constituency since he took over from Joe Byrne in 2016.

Andy McKane who stood for the UUP secured 2,774 votes, with James Hope polling 972 for newcomers Aontú and Susan Glass, of the Green Party, picking up 521 votes.

Turnout for this election was just over 62 per cent; up from the 2018 by-election but down on the last general election.

The deputy returning officer confirmed that 41,375 votes were polled out of an eligible electorate of 66,259, representing a 62.44 percentage turnout.

In the 2018 by-election, triggered by the resignation of Sinn Féin’s Barry McElduff who became embroiled in controversy over a tweet posted of him posing with a loaf of Kingsmill bread on his head on the anniversary of the Kingsmill atrocity, turnout was 55.13 per cent.