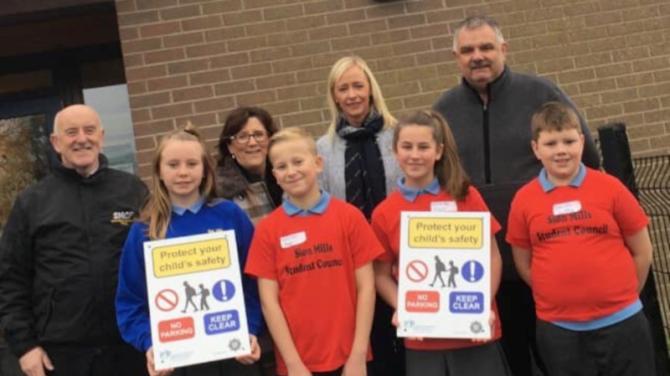 ADDITIONAL measures have been implemented outside a local primary school in a bid to solve their parking woes.

For over five years, Sion Mills Primary School has been campaigning for an end to inconsiderate parking outside the gates, amid concerns a child may be seriously hurt.

At an innovative election hustings in April this year, pupils implored election candidates to help resolve the parking ‘chaos’ at their school gates and outlined the lack of a safe pick-up/drop-off area at the gates as their main concern.

The members of the school’s Student Council and Nature Ninja’s committee also suggested a number of improvements to alleviate the problem.

Their calls did not go unheeded and, to date, the Department for Infrastructure (DfI) has painted double yellow lines at the entrance as well as installing new railings in summer, in a bid to discourage cars parking at the school gates.

In a further bid to solve the plight, Derry and Strabane Policing and Community Safety Partnership (PCSP) installed new signage on the railings last week.

The signs carry messages including ‘Protect your child’s safety’, ‘no parking’ and ‘keep clear’.

The school’s campaign to solve the issue entirely remains ongoing with the ultimate plan to use part of the school’s green area as a safe space where parents can drive in and out to pick-up or drop-off their children.

Local community worker, Andy Patton, who has been advocating on the issue for many years, has welcomed the latest measures however he says there are still parents flagrantly disregarding the restrictions.

Speaking after the PCSP installed signage on the safety railings he again urged motorists to keep the entrance clear.

“Massive thanks to PCSP for the signage we installed on the safety railings at the school entrance.

“I’m hearing that there are still parents/guardians parking close to the gates and ignoring the warnings of lines etc.

“Maybe when authorities enforce the restrictions with fines or penalty points we will see respect paid to all the children whose lives are being put in danger on a daily basis,” he said.

A spokesperson for Derry PCSP said it was delighted to be working with the school to promote more considerate parking.

“The PCSP is providing signage and leaflets to curtail the dangerous practice of inconsiderate parking,” the spokesperson added.