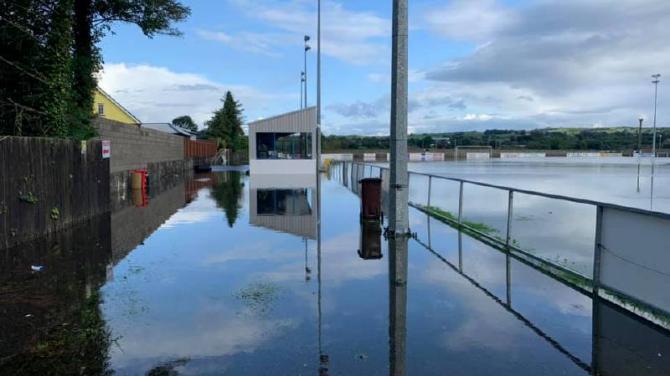 PARTS of the district were affected by flash flooding at the weekend.

Torrential downpours throughout much of Friday into Saturday morning caused pockets of flooding in many rural areas with some roads rendered impassable.

The incessant rain caused water levels to rise rapidly on the Rivers Mourne and Finn with an orange warning for flooding issued.

The main road from Strabane to Clady flooded at the Flushtown Bridge however despite the rising water on the River Finn fears of a repeat of the floods which caused widespread destruction in November 2017 thankfully didn’t materialise.

Areas of Castlederg were worst hit by flooding when the River Derg burst its banks.

Officials at Dergview FC awoke on Saturday morning to find their ground at Darragh Park under water following 24 hours of flash floods. They were forced to close the facilities to the public.

Speaking this week, club manager Ivan Sproule said: “The water has subsided now but we don’t know what damage has been caused underneath.

“I don’t know what the conditions are like around the dugouts and I know a lot of paint work was carried out around the stands during pre-season.

“At this moment in time, we don’t know the extent of the damage, but fingers crossed it’s not as bad as we first thought.

“It’s not the first time the grounds have been affected. It’s probably something the council will have to look at because this cannot continue.”

Dergview’s home game this weekend was however expected to go ahead.

Parts of East Donegal including Castlefinn and Ballybofey were also hit by localised flooding.