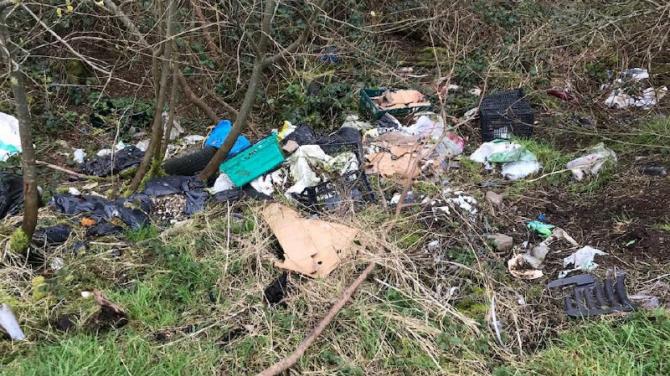 A DOZEN areas have been identified as dumping ‘hotspots’ in the wider Strabane area.

The locations of mews lanes and roadsides frequently targeted by fly-tippers were revealed to councillors at a recent meeting of council’s Environment and Regeneration Committee.

“Members had requested that officers compile a list of mews lanes and illegal dumping hotspots across the wider Strabane district following a similar exercise within Derry City,” a report composed by council’s head of environment, Conor Canning, stated.

It added that the officer team had reviewed the locations of lane and dumping hot spots across the Strabane area of Derry City and Strabane District Council.

Affirming that the list was not exhaustive, the officer said his team had identified 12 of the dominant spots where rubbish such as household items, food wrappers, paper and bottles/cans are wilfully thrown away.

In Strabane town, officers identified Springhill Park, Strabane bypass (rarely but known to happen) and ‘The Gap’ on the Head of the Town as prime hotspots with the latter owned by the Northern Ireland Housing Executive “but still bad for fly-tipping”.

Elsewhere, Ballymagorry canal (including Park Road), Fyfin Road between Victoria Bridge and Castlederg, Urney Road from Strabane to Clady, Peacock Road and Bellspark Road were also listed as were areas in Sion Mills and Newtownstewart.

The main A5 Victoria Road, the main road to Derry, was also listed as a prime target for litterbugs. Although ‘rarely’, the report stated that it is sometimes littered by passengers on passing buses etc over the weekends.

The report further stated: “Whilst the instances of illegal dumping on mews lanes within the Strabane area is quite low there are a number of areas – primarily in remote locations – that attract significant volumes of illegally dumped wastes.

“The list is not exhaustive and members will well be aware that dumping can occur on any isolated spot or road and vary in type and volume.

“Additionally NIEA have responsibility for all instances of illegally dumped hazardous wastes. Council enforcement teams undertake investigations once notified of occurrences and bring forward enforcement action once offenders are identified.”

“Council officers will continue to investigate all instances of illegal dumping and take action where appropriate,” he added.

Strabane independent councillor, Raymond Barr, who highlighted an incident of illegal dumping in the Elagh Road/Carrigullion Road areas near Strabane, earlier this year, has called for end to the behaviour.

“I would appeal to those dumping rubbish in rural areas to desist. We have a state-of-the-art disposal unity that will accept all types of rubbish,” he said.