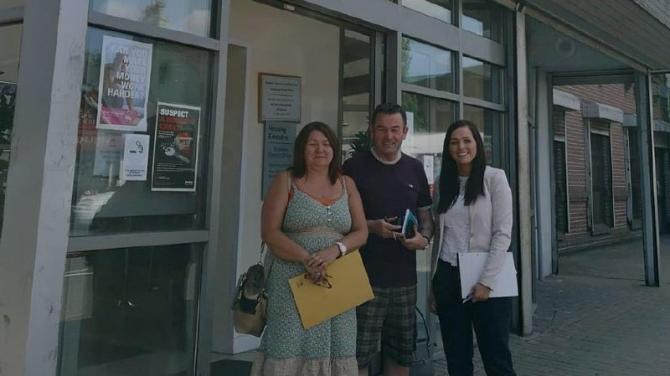 THE Northern Ireland Housing Executive (NIHE) says it has no plans to close its Strabane office.

The assurance comes amid concern that the Railway Road premises could potentially shut as the housing body seeks to looks to shift towards online services due to “changing customer needs”.

Fears for the future of the local office increased when trade union NIPSA claimed offices in the north west and southern regions have been earmarked for closure.

NIHE has since confirmed that an office in Belfast will close however there are no plans for closures in its north region which takes in the Derry City and Strabane, Causey Coast and Glens, Mid and East Antrim and Antrim and Newtownabbey council areas.

“The Housing Executive currently has no plans to close any of its offices in the west area, including the Strabane office,” an NIHE spokesperson said this week.

The future of the Strabane office was also discussed during a meeting between a delegation of local Sinn Féin representatives and NIHE officials.

Speaking after the meeting, councillor and current Mayor of Derry City and Strabane District Council, Michaela Boyle, gave a guarded welcome to the confirmation from NIHE that its Strabane office nor any of its offices in the north region is earmarked for closure.

“In the latter case the Housing Executive has cited a 23 per cent reduction in footfall at these offices in the last four years and a marked increase in telephone and online contact a trend which it says it expects to accelerate in the future.

"Given that Strabane office was already downgraded when a previous SDLP DSD Minister transferred maintenance functions out of the area, it is vital that there is no further stripping away of the remaining 'front of office'/face-to-face services being provided at the local office not least given the high proportion of social sector housing tenants in this area.”

Cllr Boyle added that despite the assurances, it’s important not to become complacent on the issue.

"While the confirmation of no closure plans for Strabane or other offices in the north region provides some welcome assurance, I don't think we can become complacent given the increased centralisation of Housing Executive services within the Belfast and South regions.

“We must continue to be on our guard to fight any moves to close Strabane if the north region embarks upon the same type of review of services,” she added.

In the statement to this newspaper, as well as affirming the future of the Strabane office, a NIHE spokesperson did say the organisation is looking at how best to deliver its services across Northern Ireland and that it would prefer not to spend money “unnecessarily on buildings”.

“The way in which our customers access services is rapidly changing. We have seen a 23 per cent reduction in footfall into our offices in the last four years, and a marked increase in telephone and online contact and we expect this trend to accelerate in the future.

“Later this year, we will be moving out of our Belfast office in Great Victoria Street to our headquarters in Adelaide Street with a new customer service office. We are looking to develop our online services for our tenants within the next year and have already extended our phone service operating hours," the spokesperson said.

“We have also changed the way in which we deliver services to our tenants and those who are seeking social housing by increasing the number of front line officer and having them call directly to customers’ homes rather than them having to visit our offices. We are, of course, mindful that our customers are requiring our assistance now more than ever, and that is why we offer services online, on the phone and face to face across Northern Ireland.

“We want to be able to respond to the needs of our customers and provide the services they require, while at the same time ensuring value for money and effective use of our offices.

“Currently, we have offices in buildings which we either own or which we rent from private or public sector landlords. We would prefer to spend money on services than unnecessarily on buildings."

The spokesperson said any proposals to alter services across Northern Ireland or in a local area would be the subject of consultation with the local community, staff, their unions and political representatives.