Anger at placing of election posters on Artigarvan bonfire 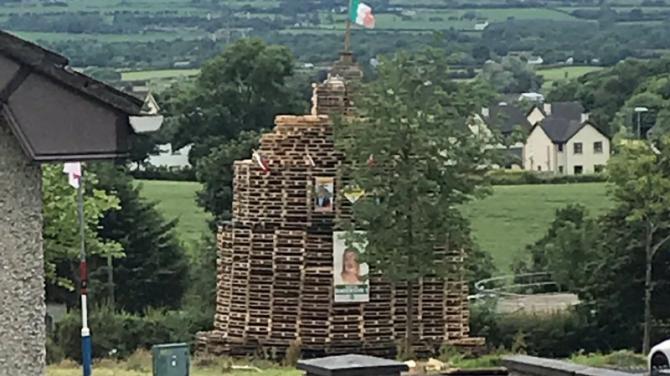 A LOCAL Alliance Party representative has condemned the placing of election posters – including one of his own – and flags on a bonfire in Artigarvan as “hateful, bigoted and sectarian”.

Scott Moore, who stood unsuccessfully as the party’s Sperrin candidate in May’s council but returning its best result in over 40 years in the area, said he was “hurt” to see one of his election posters on the eleventh night bonfire in the village.

At least one his posters appeared on the pyre alongside stolen election posters of independent Strabane councillor, Paul Gallagher, Sinn Féin's Martina Anderson and Tyrone GAA flag . The bonfire was topped with a Tricolour.

Posting an image on social media of the bonfire, the 21-year-old described the burning of the material as an expression of hatred but says it is not representative of the majority of the community he lives in.

“I have always been outraged at any attempt to burn flags and election posters on the bonfire in Artigarvan. The vast majority of people of our village have absolutely no stake in sectarianism, and don’t want this happening,” he said.

“Yet a minority are determined every year to send out a disgusting, hateful message that people of a different national identity or community background aren’t welcome.

“But on top of being angry, I am also hurt. Hurt that, having grew up in this village, going to primary school there and I and my family being a part of the community, some people within it have taken it upon themselves to steal my property - at least one of my election posters - bearing my name, and burning it upon a bonfire. Essentially telling me I am not welcome in my own community. So long as the bonfire contains these materials, it is hateful, bigoted and sectarian. It is wrong.”

He said that he had also reported the matter to the PSNI adding: “I’ve been advised by plenty of people to leave it be, forget about it, basically give myself an easy life and allow these people to tell me I’m not welcome in my own community and destroy my property.

“But I refuse to be bullied or pushed about. As angry as I am, I only wish I could say I was surprised.”

Mr Moore has received scores of well-wishes on social media including from his party colleague, Fermanagh and Omagh District councillor, Stephen Donnelly.

He said: “Scott is a proud Artigarvan man. I have worked with him for years and can testify that he never stops thinking of ideas to improve the quality of life of folks in the village he grew up in.

“He doesn’t deserve this on his own doorstep. Nobody does.”