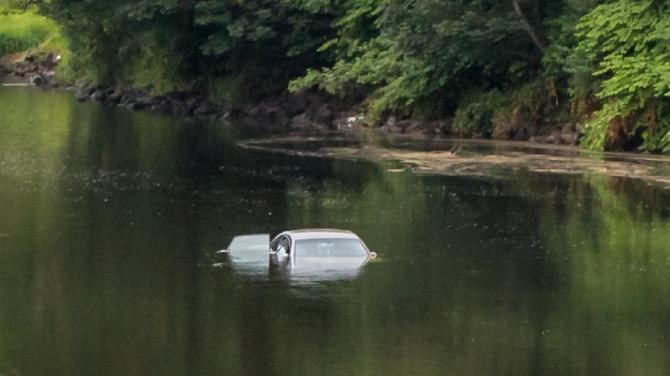 A NEWTOWNSTEWART man has spoken of how he "went into autopilot" to help rescue young children from a car that was submerged in the Strule River at the weekend.

Aaron Hempton was commended by the PSNI after he waded through the river to help carry children to safety from a submerged vehicle on Friday, July 5.

Both Mr Hempton and the children’s father managed to carry the four children safely from the vehicle. A woman, who was also trapped in the car, also made it to safety. No injuries were sustained during the incident.

Mr Hempton said he was working at his bar in Newtownstewart when the incident unfolded.

"I was working in the bar at the time and didn't see the car going in, but when the I went out I saw the fence had been flattened and the car was sitting in the middle of the river with water up to the steering wheel.

"At that point, I basically went into autopilot. I quickly phoned 999 and considered going straight into the river.

“The part of the river I was standing at is renowned for having a whirlpool, so I had to go to the other side. Luckily, I was with a friend who was able to drive me over, and we were over in less than a minute.

"By the time I got there, the father of two of the children was already at the car and was trying to rescue the children.

"I immediately went in. He got two of the children, and I got the other two. The lady in the car was able to walk across with the water up to her chest.

"The children were silent when I was carrying them, and clearly shaken. They were very young children, no older than five years of age."

"We are very, very lucky no-one was injured or worse," Mr Hempton continued. "The depth of the river is very deceiving. It is very shallow in the middle and very deep in other places.

"It is scary because the car windows were open and if the river had been a foot deeper, it would have been a lot worse.  The river is much more dangerous than people realise.

"It was lucky the car floated to the middle of the river, as there are places where it is very deep. It was a truly surreal experience and I am glad no-one was hurt.”

Speaking after the incident, PSNI Inspector Paul Patton extended his thanks to Mr Hempton for his “selfless actions.”

“We received a report at around 5.50pm on Friday evening that a car had gone into the water," he said.

“Emergency services attended the scene, to find that the female driver and four children had been helped out of the car and had subsequently departed.

“They were helped out by a member of the public and we’re especially keen to thank this gentleman for his selfless actions.

“The five were later checked over by the Northern Ireland Ambulance Service and there were no reports of injuries.”

According to Foyle Search and Rescue, a crew of Specialist Swiftwater trained volunteers were tasked to the scene, but were stood down shortly after responding.

A spokesperson from the Northern Ireland Ambulance Service said that NIAS dispatched a Rapid Response Paramedic and an Emergency Crew to the incident, and that ambulance crews assessed each patient after the incident.