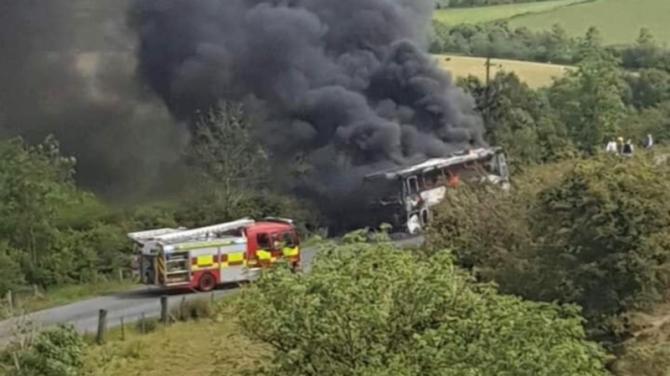 ALMOST 40 people had to be evacuated from a bus which suddenly caught fire as it travelled to a wedding in Cranagh at the weekend.

The 38 people on the 52-seater had a lucky escape when a fire broke out at the rear of the vehicle as it travelled on Ligford Road, between Strabane and Plumbridge, on Saturday.

The party of guests were stranded at the roadside following the dramatic incident which unfolded just after midday.

It’s understood the driver had detected smoke coming from the back of the coach and when he stopped to investigate, the fire soon took hold and the passengers were evacuated.

The coach was soon engulfed in flames and despite the valiant efforts of the 15 firefighters who attended the scene, the vehicle was completely destroyed.

Images posted on social media showed black smoke billowing from the coach as firefighters fought to quell the blaze.

The road was closed for a period of time but re-opened shortly afterwards when the coach was removed.

None of those on board at the time of incident sustained and injuries and it is understood the group were able to make it in time for to the wedding in Cranagh, thanks to the efforts of some local people in the area who rallied together to get them to their destination.

A Northern Ireland Fire and Rescue Service (NIFRS) spokesperson confirmed that three appliances were tasked to the scene of the coach fire at around 12.13pm.

“The cause of the fire was deemed to be accidental. The incident was dealt with by 2.03pm,” a spokesperson said.’