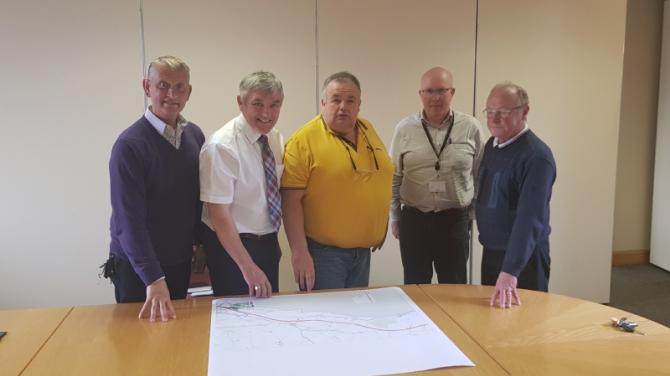 COMMUNITY and political representatives have met with council officers to press for urgent maintenance works to the scenic canal towpath at Ballymagorry amid claims that it has been “grossly neglected”.

Reopened in 2012 with plans for further redevelopment and enhancement according to locals and users of the path, not enough attention has been given to the area in recent years.

In recent months there have been complaints over issues of overgrown grass verges, the potholed surface, a lack of toilet provision, dog-fouling and the discarding of rubbish and fly-tipping close to the area.

As revealed by this newspaper last month, Derry City and Strabane District Council (DCSDC) says that it has long-term plans to rejuvenate the beauty-spot. It has cautioned however that these are subject to the availability of funding.

It’s understood a maintenance programme for the area is also to be implemented in the coming months. A commitment to addressing the perceived lack of investment in the site was given during the recent meeting with politicians and the local community group in Ballymagorry.

Speaking after the meeting, Mr Buchanan, said the meeting was “very productive” and that the delegation were assured plans are in the pipeline for the redevelopment of the local beauty spot.

“In 2006 the Strabane Lifford Development Commission awarded £1.3m for a cross-border waterways restoration of 2.4km of canal and two locks to working order.

“This is a very historic part of West Tyrone with the canal, which opened in 1796, bringing considerable prosperity to Strabane and the neighbouring town of Lifford in the first quarter of the 19th Century with both towns becoming flourishing market places for agricultural produce.

“Since its completion as part of a tourism project some 600 to 700 people per week frequent this area. However in the past two years, the maintenance of this area has been grossly neglected with overgrown vegetation, footpaths neglected and a general tidy up of the area required.”

He continued: “We had a very productive engagement with proposals for a maintenance programme to be in place in the next few months and further proposals for the future development of this area to be completed in the next 18 months – depending on funding.

“It was also encouraging to view the plans and proposals for future planned works for the upgrade of the Great Northern Railway within the next two to three years.

“I commend Brighter Ballymagorry Development Group for their interest and work alongside the various agencies in improvements in this area and we will continue to work alongside them to see all these proposals brought to fruition.”