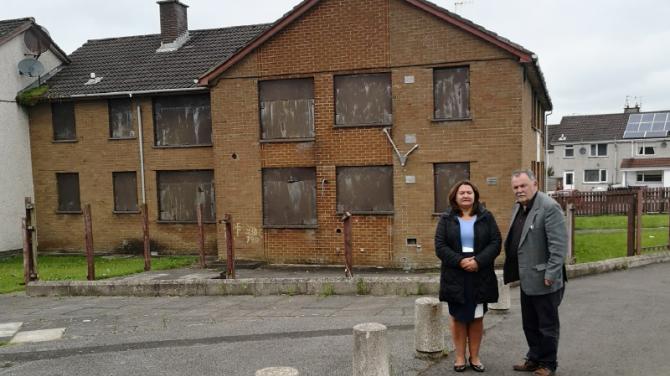 A DERELICT block of flats in Strabane, described as an “eyesore” by local residents, is in line for a major upgrade.

The Housing Executive has confirmed this week that plans are in the pipeline to refurbish the long-dormant flat block in Lisnafin Park into six self-contained housing units.

The plans are understood to include the installation of ‘assistive technology’, disability access as well as a substantial revamp of the exterior and interior of the building.

The state of the flats, which are boarded up, has long been a complaint among locals living in the area.

The flat block has lain dormant for almost a decade and has been a magnet for anti-social behaviour in the past with repeated calls from the local community and politicians for the Housing Executive to take action.

A spokesperson for the housing body told this newspaper that plans are being finalised for the upgrade work with an anticipated start date in 2020.

“The Housing Executive can confirm that following consultation with local community representatives, proposals are being finalised to reconfigure and modernise the flats at Lisnafin, Strabane,” she said.

“These proposals are subject to approval, and once the necessary building and planning requirements are passed we anticipate work should begin next year.

“We want to notify all local residents of our proposals and will be displaying presentation boards in the coming weeks once initial proposals are approved.”

Sinn Féin’s Michaela Boyle has welcomed the development and says it will be a relief to residents living in the area.

Councillor Boyle, who is Mayor of Derry City and Strabane District Council, said the issue was one of the main talking points for locals during the recent election campaign.

“Local residents have been expressing their grave concerns to our representatives regarding the state of this derelict, albeit secured, block of flats not least because they are such an eyesore,” she said.

“Furthermore, in an area with such a high need for social housing and with such a long waiting list it is has been a crying shame that these flats have remained derelict and unoccupied for such a long time.

“Further to representations from local residents requesting that action be taken to upgrade these flats which has formed part of our party’s wider lobby for additional social housing in Strabane, I am delighted to have received confirmation from the Housing Executive that plans to transform this block of flats in six self-contained housing units are now in the pipeline.

Mrs Boyle added: “This will include substantial refurbishments both inside and out, disability accessibility, the installation of assistive technology and much more. All plans are subject to approval and costs.

“Once all the details are firmed up the Housing Executive will be liaising with residents in the immediate area of the building of the proposed changes and the proposed plans will be available to view in the district office.”