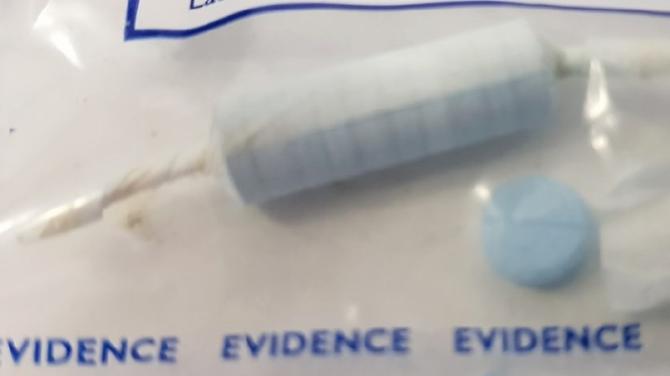 POLICE in Strabane have issued a warning about the circulation of “potentially lethal” diazepam tablets.

In a post on its social media page at the weekend, a Strabane PSNI officer revealed that pills were seized from a male in Sion Mills last Thursday night.

The man was later transferred to hospital for treatement such was the “horrible effect” of the substance, police said.

Posting alongside an image of pills, the officer said: “These blue pills, suspected to be diazepam, were seized from a male in Sion Mills overnight. As you can see from the way they are packaged, we don’t reckon he got these from the chemist.

“This male had to be transferred to hospital for treatment, such was the horrible effect of this substance. I have seen first hand the damage that drugs can cause and I am asking our community to be on the lookout for these especially.

“A batch of blue pills, very similar in appearance to these ones, have been in circulation recently in other parts of Northern Ireland and are alleged to be ten times stronger than standard diazepam.

“I am not a medical expert but I do have previous experience of dealing with persons taking diazepam and I can say with confidence that any pill that strong is potentially lethal.”

Urging anyone who comes into contact with similar pills to contact them, the officer urged: “If you hear your friends or family talking about ‘blues’ or if you see a small package like the one shown, warn them at the very least about how dangerous this stuff is.

“If you have any information about drugs in our area, come and speak to us, or report anonymously via Crimestoppers.

He said he believed however that such seizures are “most likely only the tip of the problem”.

He added: “These are lethal. These have the real potential to kill.  If you are offered or given anything that resembles these, destroy them immediately. Death dealers get off the backs of society.

“The community has a major part to play. They have to report it and police have to be seen to be doing their job. Where it can fall down is when it gets to court and a lenient judge does not apply the law.

“If you want it, it’s here and available in the village – too many people making money off the lives of others. It's now time these death dealers of society were chased out of what was a model village.”

Police have appealed to anyone who has information about the illegal sale and use of drugs to contact them on the non-emergency number 101.

“Or, if someone would prefer to provide information without giving their details they can contact the independent charity Crimestoppers and speak to them anonymously on 0800 555 111,” a spokesperson added.