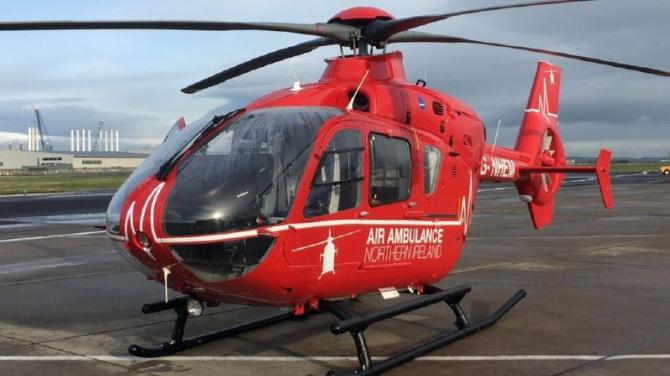 THE Air Ambulance Northern Ireland (AANI) service was tasked to 21 emergencies in the district council area in a ten-month period.

The figure was disclosed during the monthly meeting of Derry City and Strabane District Council where a DUP motion urging the authority to investigate the possibility of providing financial support to the life-saving service was passed.

The motion proposed by the Alderman David Ramsey, stated: “That this council commends the work of the Northern Ireland Air Ambulance and have discussions on future financial support at the relevant committee.”

Since coming into operation in July 2017, the service has played a huge role in bringing emergency hospital care to the remotest regions of Northern Ireland by helping the injured at the scene of accidents, as well as providing them with emergency transport to hospitals.

AANI however is a charity and each day it costs in the region of £5,500 to operate. Annually £2m is needed but the service receives no government funding and relies entirely on support from the generosity of the public. The service operates 12 hours a day, 365 days a year and can reach any part of Northern Ireland within 25 minutes.

Speaking to his motion, Alderman Ramsey said: “The costs surrounding the helicopter relies solely on the goodwill of the general public. This service needs a sustainable income to ensure the helicopter keeps flying and there is also a back up helicopter as well. In 2018 the Air Ambulance service has been deployed 21 times in our area, in our city and district. That's between January 1, 2018 and October 31, 2018.”

“I would however argue that the Air Ambulance should be supported by the government and not have to rely solely on charitable donations, like some other of our emergency services. This service should be the same as our police cars, ambulances and fire engines,” he said. “Unfortunately, we now find ourselves in a political vacuum in that Stormont has been off the scene for over two years. If the Executive reformed in the morning then yes, let’s go and tell them we want to see central government fully support the service.

“The Air Ambulance service costs approximately £2m annually just to keep it in the air. It's roughly £5,000 a call-out. This is a huge amount of money to rely on public donations. I have no doubt that if this service was to be lost due to funding we'd be up in arms.”

He told councillors: “This is our opportunity to provide some level of assurance to the Air Ambulance Northern Ireland – a service that services the whole community. I believe this council must consider at the very least, an annual donation to this much needed, life-saving service.”

Sinn Féin’s Ruairi McHugh also commended the service and all those who campaigned for its establishment including his own party members, Martin McGuinness who “championed the provision of the service from the outset” and Michelle O’Neill, former Health Minister.

“There is no doubt that countless lives have been saved since this service became operational just over a year and a half ago. The Air Ambulance is providing advanced critical care, benefiting those whose lives are at serious risk following significant injury or trauma by bringing urgent medical assistance directly to the patient at the scene,” he said.

“A mistaken belief among many people is that its the speed of getting a patient back to hospital which is the most important fact but in reality, the Air Ambulance is bringing emergency hospital care direct to the casualty where medical interventions can save lives. Our council has a significant rural population and a rural road infrastructure which does not lend itself well to meeting the critical golden hour for an ambulance to arrive when called.”

Cllr McHugh added: “The crucial and real benefit is that the service is often bringing a trauma team to very remote places and delivering resuscitation there. They are doing interventions which would normally have to wait until the patient is brought to hospital and thereby enhancing their chances of recovery. We recognise the funding challenge faced annually to keep this service in operation and we support the motion.”

The SDLP also supported the motion with group leader, Martin Reilly, stating that council should also “find out whether the other ten local authorities contribute towards the Air Ambulance and if not why not because surely they should be doing it in the same way that our council is considering it.”

Ulster Unionist councillor, Alderman Derek Hussey, concurred with the sentiments adding: “I welcome the fact that we're passing this back to be looked at but we also have to be careful that we are not allowing the Health Service to abrogate their responsibility in proper funding for what is a blue light emergency service.”

The motion gained the unanimous backing of all councillors. A report on the matter will now be brought back before a committee meeting.