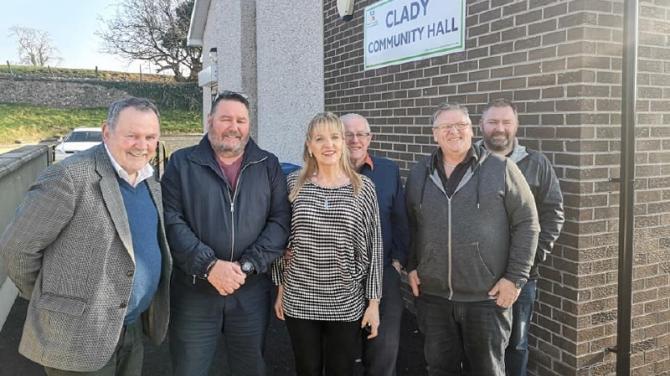 THE DUP's support for Brexit would damage places like Strabane and West Tyrone "beyond repair"  in their attempts to "shackle us to Britain by reinforcing partition" claimed Sinn Féin MEP, Martina Anderson.

She said there was no evidence that the British Government was going to replace money that would be lost by leaving the European Union and now was the right time for an imaginative new look at the future of Ireland in a broader context.

Ms Anderson's remarks came at the end of a tour of a number of locations in West Tyrone including Clady and Glenelly, where she spoke to various organisations and community groups on Brexit and its potential outcomes.

Speaking in Strabane Ms Anderson praised the input from Border Communities Against Brexit, without their efforts it would have been hard for her to convey to people in Europe the extent of the genuine concerns being felt here, she said.

She reminded the meeting that it wasn't until around this time two years ago when she made her controversial comments in the European Parliament that people began to sit up and take notice of what was going on here.

"No one was really thinking about any impact Brexit might have in here, the focus was on Scotland," said the MEP.

Addressing the parliament at that time, Ms Anderson rejected any kind of border in Ireland after Brexit. She said rather than listen to concerns over Brexit, Ireland had been told to "get over it" and added "no border hard or soft would be accepted in Ireland".

Referring to Prime Minister Theresa May, she said: "Theresa, your notion of a border, hard and soft, stick it where the sun doesn't shine 'cos you're not putting it in Ireland."

She told the meeting in Strabane: "I know I was a bit bold in doing that and I acknowledge that but what it did do is get international attention. They began asking why would an Irish MEP stand up in the European Parliament and use such language to a British Prime Minister. People began to realise what had happened to this island because of partition and why we couldn't have a situation where part of this island was in the EU and part outside it and why we needed to uphold the Good Friday Agreement in all its parts."

She spoke of the campaign to try to get Designated Special Status for Northern Ireland to remain within the EU and how they defined the landscape within the EU to show them the damage that Brexit was going to do here.

"We just circulated facts," she said.

Ms Anderson said the British Government, propped up by the DUP and the European Research Group, did not want to support the 'Backstop' because they wanted a hard Brexit.

"Some of them because they hanker after an empire that's gone and others because they want to destroy the Good Friday Agreement because they didn't support it in the first place. They want to shackle us to Britain by reinforcing partition. It's no surprise to me to see them take this position," she claimed.

Ms Anderson said there was no going back to any form of partition as it had impoverished the country and to think it could come back via Brexit was unacceptable.

She likened it to a train crash but stressed there was still an opportunity for them to have a legitimate conversation in order to leave this train wreck.

She produced information from a report produced by the Institute for European Studies at the University of British Columbia, that combined economies of Northern Ireland and the Republic could grow by more than €35.6bn if Ireland reunified, with the bulk of the benefits accruing north of the border.

"Every man, woman and child here would benefit by €5,500 so you can see the economic argument has been won. Legally and constitutionally it is possible to advance the reunification of our country as well. It is offensive to say to people they can't be involved in the conversation about the form and shape of a new Ireland," she said.

The MEP said the EU had in the past recognised similar situation in places like Germany and Cyprus.

She pointed out that £3.5 billion in EU funding came to Northern Ireland of that £2.3 billion went to farmers and dwellers. The European Social Fund and European Regional Development Fund money was going to be lost and no one could convince her that the British Government was going to replace it.