Council motion to oppose controversial gold mine plans in the Sperrins 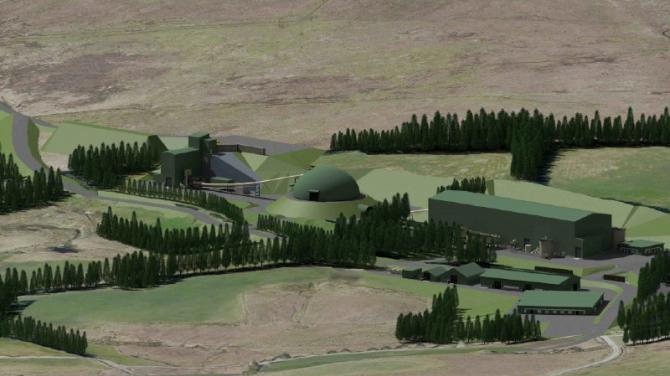 A MOTION opposing plans to develop a gold mine and processing plant in the Sperrins is to come before four councils next week.

The motion will set out the party’s opposition to the controversial plans and will seek the support of councillors across all political parties in opposing the application by Dalradian for the mine near Greencastle, involving the use of cyanide.

The motion states: “This council opposes plans to develop a gold mine and processing plant in the Sperrins and wider region. Given the serious health and environmental risks involved, this council is opposed to the use of cyanide for mining purposes, which also contravenes the European Parliament resolution of April 27, 2017 on the implementation of the Mining Waste Directive (2006/21/EC).”

Dalradian says the use of cyanide will be heavily regulated and does not pose a risk to the public or the environment however people living near the proposed facility and environmental groups remain vehemently opposed to it. Protestors also say it will be a huge eyesore in an area classed as an Area of Outstanding Natural Beauty (AONB). Dalradian says it can get millions of ounces of gold from the Sperrins over the 25-year life of the mine, creating hundreds of jobs in construction and operation

Speaking ahead of his party’s tabling of the motion at next Thursday’s full meeting of Derry City and Strabane District Council, Strabane councillor Brian McMahon explained: “We are bringing this motion simultaneously to the four councils seeking their support to oppose plans to develop a gold mine and processing plant in the Sperrins and wider region.

“This motion calls upon each of the councils to oppose these plans on the basis of the serious health and environmental risks involved, not least the use of cyanide for mining purposes, which also contravenes the European Parliament resolution of 27 April 2017 on the implementation of the Mining Waste Directive (2006/21/EC).

“By adopting this motion, the four councils will be sending out a very powerful message of unified opposition to these plans and to the environmental damage caused by precious metals mining and the extraction of Ireland's non-renewable natural resources with little or no benefit to local communities.”

The motion follows on from a meeting with Dalradian on Friday by Sinn Féin deputy leader, Michelle O’Neill. Commenting afterwards, she said the party’s stance on gold mining and processing is “unambiguous”.

“We are opposed to the use of cyanide in mining due to its environmental and health implications. And we recognise the environmental damage caused by precious metals mining and the extraction of Ireland's non-renewable natural resources.

“That is why Sinn Féin's former Infrastructure Minister, Chris Hazzard MP., made it clear that any planning application should be subject to an independent public inquiry before a final decision is taken. That remains our position,” she said.

A spokesman for Dalradian said it “welcomed the opportunity to meet with Sinn Féin to discuss its proposed project in what will be a new sector for Northern Ireland”.

"We also discussed our detailed plans to develop a modern underground mine which meets and exceeds environmental regulations.

“We too, like Sinn Féin, support a public inquiry which is the responsible way of looking at all the issues involved and allowing all parties to share their views, including those who have questions and concerns about it, particularly from an environmental perspective,” a statement said.

The statement added that there were other mines operating in Western Europe using processes similar to those proposed by Dalradian, such as Tara mine in Navan, County Meath which has been operating successfully since the 1970s.

"We are seeking to replicate Tara's long standing success here in Tyrone," the spokesman added.

Meanwhile, it has emerged that some 12,000 objections have been received by the Department for Infrastructure (DfI) to the planning application and the accompanying Waste Management Plan.

When asked what stage the planning application was currently at and when it was proposed to have it dealt with, the spokesman said: “Further environmental information (FEI) was requested from the applicant, Dalradian Gold Ltd in January 2019. The planning application remains under consideration by the department.”