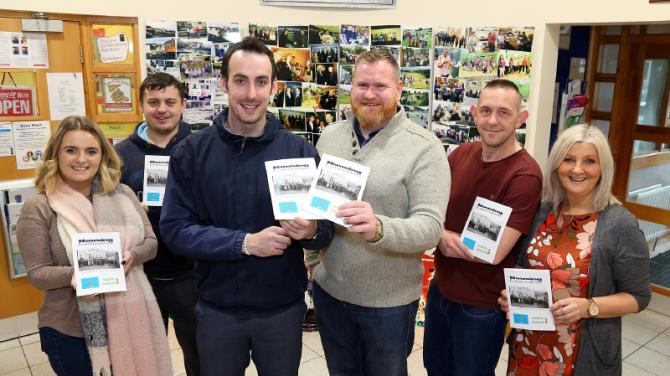 A PHOTOGRAPHIC timeline display of days gone by has been unveiled in a local community centre which is celebrating serving its area for two decades.

Fountain Street Community Development Association (FSCDA) has been at the heart of its community for the last 20 years and to celebrate the milestone anniversary the group recently brought past and present members together to create a pictorial display commemorating many of its high points.

From the early days of the ‘old hut’, the official opening of the centre by the then President of Ireland Mary McAleese, festivals, summer schemes and many more, the display encapsulates all the good that the Fountain Street centre has brought to its local community.

From humble beginnings, the group has been the focal point for many generations growing up in the Head of the Town area and as it looks ahead to the future, a rejuvenated committee says a bright future lays ahead following a major renovation of the facility.

The committee also has big plans in the pipeline including the creation of a cultural education hub, more afterschool programmes and social enterprise projects.

The 20th anniversary photographic timeline display was funded by the Housing Executive. FSCDA  said it was keen to let everyone see how the community centre has evolved from the ‘old hut’ to today’s community centre.

The project was carried out by local residents over an eight-week period and proved educational for everyone involved.

Speaking about the project, Mary Deery from FSCDA, explained: “We rely on funding to employ vital community workers alongside our volunteers. This has helped local residents educate themselves and grow as a thriving community.

“The community centre has been crucial in contributing to a more stable, safer and cohesive community for Strabane.

“Thanks must go to the Housing Executive for their Community Cohesion funding that has allowed us to preserve a part of local history in this photographic timeline.”

The Housing Executive’s patch manager for the area, Anthony McGrath, was also at the celebratory event during which the display was officially unveiled.

He said: “It’s great to be a part of this 20th anniversary celebratory event at Fountain Street Community Centre.

“Funding community groups to carry out projects like this promotes mutual understanding and respect while at the same time developing better relationships.

“A permanent visual timeline in the centre is a great way to celebrate the community group’s history and bring residents together. Well done to everyone involved.”

The photographic timeline is now permanently displayed in the centre and the group has extended a warm welcome to all current and former residents to pop in and have a look at some of the group’s most memorable highlights down through the years.