Education sector funding crisis is 'the worst it's ever been', principals warn at meeting 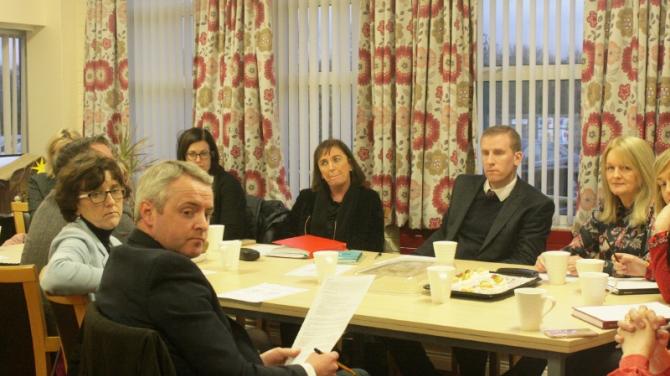 THE funding crisis currently facing the education sector is “the worst it’s ever been”, local principals have warned.

A group of 14 principals representing various education sectors in the wider Strabane district united this week to approve a letter highlighting to parents the ‘profoundly negative’ impact ongoing cutbacks to school budgets is having on education provision.

The letter, under the banner of Strabane and District Principals representing primary schools in the Catholic Maintained, Controlled, Integrated and Irish Medium sectors, is being issued to all parents and guardians this week.

The action follows on from a meeting earlier this year between principals and vice-principals with Derek Baker, permanent secretary, to highlight the strain on school budgets. The school heads have warned that unless urgent and effective action is taken, schools will face increasing pressure and that subsequently the ability of schools to address the educational and emotional needs of its pupils will be impacted.

Speaking at the meeting at St Mary’s PS on Monday held to approve the missive, Bridget Wilders, head of St Catherine’s Primary School in Strabane said she and her colleagues had not taken the decision to issue the letter lightly.

“There is an education funding crisis. It's quite unreal at the minute and it is set to get much worse. Most schools have had their budgets drastically reduced. They are challenged badly and if they are not in debt yet, they could be in debt within a matter of a year or less. Our children are the most important people in this whole process and it is they who ultimately are being affected,” she said.

She said the cutbacks are likely to result in increased class sizes, a reduction in staffing, increased demands on staff, charging for extra-curricular activities and essential maintenance works not being carried out – among many others.

“It obviously goes without saying that the educational provision has to be more challenged (as a result). There's none of us who can say that the overall educational provision for our children is going to get any better. If you are pulling back on all of these things then it stands to reason that the standard of education is going to be impacted and impacted badly. This is affecting every school,” Mrs Wilders explained.

“To that end, morale is at an all time low for both teachers, non-teaching staff, for the management at schools and perhaps the parents as well. They must be fearful for their children. Whilst we don't want to unnecessarily frighten people - that's not the goal of this - we certainly need to raise awareness because we feel that with the power of our people not only in our community but throughout Northern Ireland, then surely some kind of change will be affected if everybody stands together. We haven't done this lightly and we are fearful ourselves for the future. It's never been as frightening in education as it's been at the minute.”

Sandra O’Doherty, principal of St Mary’s PS, said the seriousness of the issue is evident in how many principals have united to push the case for immediate change.

“This the first time that I've known such a large group of principals to unite and that is indicative of the situation we're in. The more that we have writing and talking to their MLAs, the better. In all my years as a principal, this is the worst situation that there has ever been.

“We hope that parents get behind us and that they will understand the challenges that are being faced. Every child only gets the one opportunity to go through the system once so it's vital that they get the best and given the cuts and the funding that we have now it's not going to happen. It’s going to affect their child so that's why we need the parents to support us,” she said.

Colette Maguire is a teaching principal at St Columba’s PS in Clady. She said: “The way that our budget is at the moment, I cannot afford to take any principal release times so that has increased my workload and has affected my home-school life balance.”

The school heads agreed that they are all facing “very difficult decisions” as they attempt to juggle their budgets against a backdrop of increasing pressures and budgetary constraints. It’s a situation that they foresee as only getting worse.

Brian McGurk, principal of St Patrick’s PS in Castlederg, said he, like his colleagues, is “very frustrated” with the situation but that it is important to create awareness among parents as some of the decisions being taken now may not take full affect until for a couple of years.

“Basically the only services that you will be able to provide will be classroom-based teaching. All the other things that you provide in terms of extra provision or special needs, there's just no money available for it,” he warned. “I think parents are not fully aware of the extent of the crisis and that’s because of the good job that schools and teachers are doing against a backdrop of mounting pressures.”

He added that alongside the unsustainable stress on staff, there will be a “marked decline” in education standards.

“In national and European surveys, Northern Ireland scores pretty well but I would say in two or three years you will start to see standards declining and it’s a direct result of not funding the children who are in our system now. They will lose out ultimately. We want schools properly funded.

“There's been eight years of austerity. You would have thought that in any disadvantaged community that the place to put the money would be in educating young people but it’s being stripped out of schools. Anything that is considered surplus to requirements has been stripped out of schools and it's been pushed on to the teachers and managers of schools to just deal with the situation,” Mr McGurk said.

Gavin Gallagher is the principal of St Eugene’s PS in Victoria Bridge. He said: “At this point in time it’s the quality of education that's going to give unless something changes. We were already not being well enough funded before this all started. Now the funding is even worse, the demands are greater and we have less to deal with them. Proper funding for children is the key.”

The issuing of the letter, the principals say, is the first step in a lobby process of raising awareness of the situation with MLAs and other education officials also expected to be copied in to the letter.

“Our youngsters are the future. Children have the right to be educated and get the absolute best quality of education that they can. I’m in my tenth year as a principal and I would this is the worst it’s been. It's not a good time, “ Bridget Wilders said.

“We're at the stage where we feel that our own voices need to be heard more. This is the first action that this group of principals is going to take and then there will be further meetings and more discussions about what could potentially happen next to keep the momentum.

“We hope somebody, somewhere in government will listen. Something needs to give and ultimately we need change. We want change and we need the money to go to the schools where it’s needed to provide the basics.”