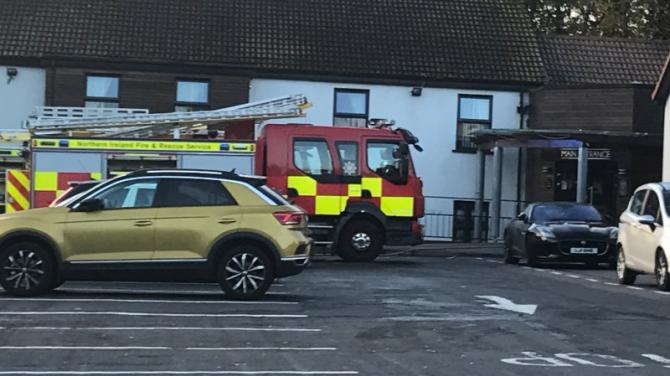 A STRABANE hotel which sustained damage in an accidental fire earlier this week is 'open for business'.

Several appliances were tasked to the scene of the blaze at the Fir Trees Hotel, Dublin Road, in the early hours of Monday morning.

Two fire engines from Strabane station as well as appliances from Newtownstewart, Castlederg, Crescent Link and an aerial appliance from Northland Fire Station, were despatched to the blaze which was quickly brought under control.

Damage was contained to an accommodation block of the hotel with staff and residents all evacuated unharmed. The Northern Ireland Fire and Rescue Service (NIFRS) confirmed the blaze is being treated as accidental.

“The fire was located in the first floor and roof space of the building. Firefighters wearing breathing apparatus extinguished the fire.

“The cause of the fire is under investigation however appears to be accidental. The incident was dealt with at 2.43am,” a spokesperson said.

The long-established hotel, which has recently undergone an extensive refurbishment, was back open for business on Monday with staff there full of praise for the quick actions of the emergency services in bringing the fire under control.

A statement issued on Monday afternoon on behalf of the management of the hotel to its ‘loyal and valued’ customers also extended thanks to the local community for their support in the wake of the blaze.

It read: “The hotel is open for business. Thankfully the unfortunate fire has been contained to a part of the accommodation block.

“More importantly no-one was hurt or injured thanks to the fabulous work of the staff of the Fir Trees and the Northern Ireland Fire Service whose professionalism arrested what could have resulted in a more serious outcome.”

The statement added: “May we take this opportunity to thank the many, many people for their offers of help and supportive messages. The good nature and kindness of Strabane community has been overwhelming and more than appreciated by everyone here at the Fir Trees Hotel.”

Also praising the work of the emergency services was local Sinn Fein MLA., Michaela Boyle, who has offered her support to hotel owner, Johnny Kelly and his staff. She said the incident could have been much worse.

She said she was glad the business has been able to remain operational and wished the hotel a ‘speedy recovery’ to full capacity from the damage.

"Our thoughts go out to the proprietor, Johnny Kelly and his staff. I believe that the Fire Service contained the fire so there was minimal damage to the bedroom block. Thankfully the staff acted very, very quickly in getting residents and those that were there out of the building.

SDLP MLA., Daniel McCrossan said he too was “very sorry” to hear of the fire and offered his full support.

"I’ve been in contact with Johnny and the Kelly family to offer my support. Thankfully, both the public and all the staff vacated the hotel safely and no one was hurt.

"Can I also put on record my appreciation to the Northern Ireland Fire Service, the PSNI and to Johnny and his staff for getting everyone out safely," he added.