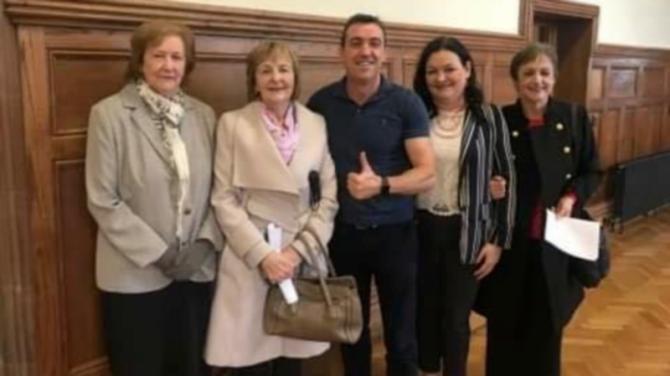 THE new 3G pitch at Melvin Sports Complex is set to be named ‘The Felix McCrossan Pitch’ in honour of the late soccer legend and trade unionist.

A well-known character around Strabane, Mr McCrossan passed away in 2013 following a lengthy illness. He was known throughout the North West for his involvement in soccer as well as his championing of workers’ rights.

At Thursday’s meeting of Derry City and Strabane District Council’s (DCSDC) Health and Communities members of the McCrossan family were present in the chamber to hear councillors vote to adopt the outcome of the recent naming consultation on the £1.4million pitch.

The facility opened earlier this year, replacing the existing sand synthetic pitch and grass football pitch with a new multi-sport surface to cater for football, rugby and Gaelic.

A consultation on the proposal to name the arena started on July 18 and ran for nine weeks closing in August.

The results of that consultation were presented to councillors at Thursday’s meeting. There were 726 valid responses to the consultation with 92 per cent of those (680) in favour of changing the name of the pitch to that of the late Strabane man, councillors were told.

They were also advised that in keeping with the council’s Asset Naming Policy over 500 responses were received and the threshold of two thirds of respondents to the consultation exercise in support of the naming proposal was met.

“Members were informed at the meeting that a further report is expected to come before the committee to consider the marketing and implementation implications of the decision,” a spokesperson for DCSDC said.

Independent Strabane councillor, Paul Gallagher, had proposed the naming in honour of the late Strabane man earlier this year. Expressing his delight at the unanimous endorsement of his proposal, he said: “(It’s) a well deserved recognition to one who has made a significant contribution to the community of Strabane.”

Elsewhere, in a statement issued following the meeting, Strabane town Sinn Féin councillors Brian McMahon and Karina Carlin said: “The Sinn Féin grouping was delighted to support the original proposal to name the pitch in memory of Felix and to encourage support for it during the consultation period.

“That 92 per cent of respondents voted in favour of the proposal is testament to the esteem in which Felix was held within this local community and further afield.

“Felix’s name was synonymous with soccer in Strabane and his life-long dedication to promoting the game locally, during the good times and the lean times, so the decision is a fitting and lasting tribute to his memory.”

Also welcoming the decision, West Tyrone SDLP MLA., Daniel McCrossan said it is a ‘fitting tribute’ to a man who delivered a great deal for local people.

“Felix McCrossan was an absolute gentleman and it is a fitting tribute that this facility will be named in his honour. He delivered so much for the local community, to the youth of this area and I welcome the fact that is now being appreciated,” he said.

“Felix was one of Strabane’s sons and it is only right that this facility is named after him. I’m positive everyone in the local community and all the former teams he coached will be delighted about this decision. Felix gave so much of his life to Strabane and its people. I am happy this will now be honoured and remembered for many years to come.”

The decision of the committee is expected to be ratified at the full monthly meeting of council to be held later this month.