Much-loved woman dies while on a special holiday in Spain 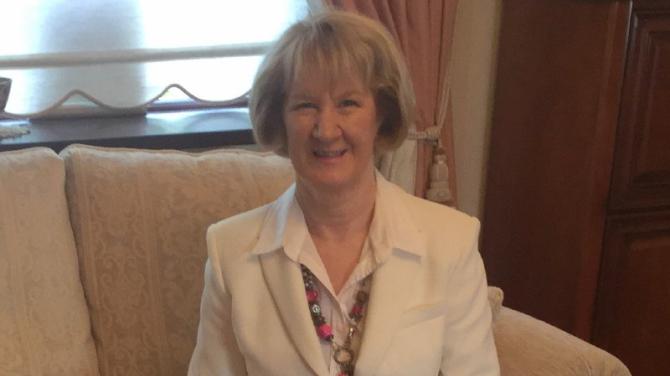 A MUCH-loved and highly respected Newtownstewart woman who flew to Spain with her husband to celebrate her 70th birthday tragically took suddenly severely ill two days into their break and subsequently passed away in hospital in Malaga.

Mrs Freda Wilson, a native of Stranorlar, Co Donegal, is believed to have suffered a brain haemorrhage on the actual day of her birthday, September 15, and passed away just over two weeks later, on Tuesday, October 2,  while still a patient in the hospital.

Family members, sons, Colyn and Trevor, and daughter, Lorraine, travelled out to support their father Bryan, throughout the ordeal and were relieved when the body was repatriated on Sunday night to their home at Bunderg Road.

A selfless charity worker, church worker and a passionate gardener, Mrs Wilson's vibrant upbeat nature radiated and made her a firm favourite no matter what the occasion or who she was with. She was chairperson of the Newtownstewart branch of Cancer Focus between 2006 and 2011 and acted as a committee member for many years too. Her love of dancing and elegant fashion also contributed to her ebullient and engaging personality. She was also a director of the building and civil engineering firm, GF Wilson, based in Newtownstewart, which has been running since 1947.

Family members paid tribute to a wonderful wife and mother who was christened Winifred Kathleen, but was better known to everyone as Freda. Husband Bryan, also a manager with the same company, recalled how the couple had decided to go to Spain for 10 days to celebrate Freda's 70th birthday when she took ill two days after they arrived.

"She was my soulmate for a lifetime and was very interested in the church. She was also an exceptional gardener. Every time you were looking for her you would find her in the garden somewhere."

Mr Wilson said she was "in perfect health" when they arrived in Malaga on Thursday, September 13.

"We went for a stroll on Friday, went to the pool on Saturday and she became unwell when we got back to the hotel."

Her condition never improved and she was unable to communicate.

"She got a bleed in the brain and it just became too complicated," Mr Wilson added. "She was in a specialist unit and they did a good job and fought hard for her. They told me that her heart stopped six times on the Monday and her life was ebbing away. They felt her brain was simply too damaged and she died early the next morning on Tuesday, October 2," he said.

A protracted wait followed to bring Mrs Wilson home, with the family obliged to use three separate airlines by the time she arrived in Belfast on Sunday night.

Mr Wilson said it was a difficult wait for the family, but took comfort his wife had been enjoying her holiday before her illness.

One of her sons, Trevor, said the family was shocked and saddened at what had happened but were grateful for all the support they had received throughout their difficult times.

Speaking at yesterday's (Tuesday) funeral service in a packed Ardstraw Parish Church, Newtownstewart, the rector, Rev Ivan Dinsmore, outlined Mrs Wilson contributions to her family, the church and the community.

"When we lose someone we love it is always an occasion for sadness and grief, this is especially true when the person we lost is a dear and much loved friend. Freda was a dear and much loved friend to us all here in Ardstraw Parish Church She rarely ever missed a service here, and put her heart and soul into the worship and service of her Lord. Today is a time to grieve, but it is much more than that. Today is a time to give thanks because there is so much to give thanks for in Freda’s life.

"All of us were shocked by Freda’s sudden illness and passing. I spoke to her at the Church door on the Sunday just before she went on holiday. She was her usual cheery happy self. I said I would see her next week. She replied that I wouldn’t and proceeded to tell me that she was going off to Spain to celebrate her birthday. She was full of joy and excitement looking forward to her time away, a nice break, some sun and a nice relaxing holiday.

" I would never have guessed for a second that this would be the last time I would speak to her. If Freda’s life had ended there it would be meaningless and cruel. Life would be so tragic and so unfair if this was all there was, if there was no world without end, if there was no place prepared for us in God’s home with many mansions, but thank God there’s more. Thank God life is not that cruel and empty and unfair and even though bad things happen to good people like Freda, and even though earthly life is cut short we are not without hope, because one day all true believing Christians will see the Lord face to face, and it is our hope today that Freda is now enjoying that eternal life.

"Following her birth in the townland of Ballyboe, in the Parish of Kilteevogue, near Stranorlar, where she began life as the daughter of George and Gertie Bustard, part of a large family of three boys and six girls. Freda was educated at Welchtown school, indeed the placename might indicate Celtic ancestry in Freda’s family, because it is possible that the Bustards were of Welsh origin as the name is common in Wales. Possibly they arrived in Ulster at the time of the Plantation. Whatever, the history, Freda was educated in the school there and in later years she trained as a teacher and returned to teach in the school where she herself had learned.

"As well as her teaching Freda was very involved in the life and ministry of Kilteevogue Parish Church, where she sang in the choir and taught Sunday School, amongst many other things. It was in this Church that she loved that Freda married Bryan Wilson on August 2, 1972. She moved to Newtownstewart, but continued to teach in Welchtown, eventually bringing her sons with her to school.

"Freda’s teaching career in the small country school was not entirely uneventful. On one occasion while travelling home from work, her car was hijacked by criminals, who needed a car for an armed robbery. Freda and her children were abandoned on the side of the road in Clady and the robbers sped off in the vehicle. She was quite shaken but had to walk to a farmhouse to phone Bryan to come and pick them up. When the police found the car the next day it was intact, including the basket of eggs which Freda’s mother gave her and which had sat on the back seat right through the robbery and escaped undamaged. Freda left her job in Welchtown when Lorraine was born."

Mr Dinsmore outlined how Mrs Wilson had become heavily involved in this life of her current parish, at various times serving as a Select Vestry member, choir member, diocesan synodperson, lesson reader, and Mothers’ Union Branch Leader. She was Branch Leader when the MU celebrated its 75th anniversary in 2012. She led the branch with distinction and gave her all, as she usually did with anything she did for the Church, always with a sunny disposition and a smile on her face, he said.

"As well as the Church, Freda was very heavily involved with the work of the Newtownstewart branch of Cancer Focus. Indeed, in death she is still supporting this very worthy cause as the donations in her memory will be given to the work of Cancer Focus. In addition to this, Freda volunteered in the Red Cross shop in Omagh. Her charity work was motivated by her faith and her desire to serve God and neighbours. First and foremost, though, Freda was a devoted wife, mother and grandmother.

"She made a particular effort to welcome Sue (daughter-in-law), into her family. Sue is originally from Thailand, and there is no doubt is was a big step for her leaving her home, family and country and moving to Northern Ireland, where there is such a difference in language, culture, even the weather. Sue has told me that Freda was like a second mother to her, and her kindness and compassion for Sue as a new member of her family greatly eased Sue’s transition from life in Thailand into her new life in Northern Ireland."

Mr Dinsmore said he could say much more about Freda’s family life but instead decided he would leave that to someone who knew her best, her daughter, Lorraine, whom he invited to come forward and share a tribute to her mother.

Lorraine recalled their many memories of her mother and contributions to their lives in general. She captured the essence of her mother's many wonderful attributes and generosity of spirit to all.

Mrs Wilson was laid to rest in Ardstraw New Cemetery immediately after the service.