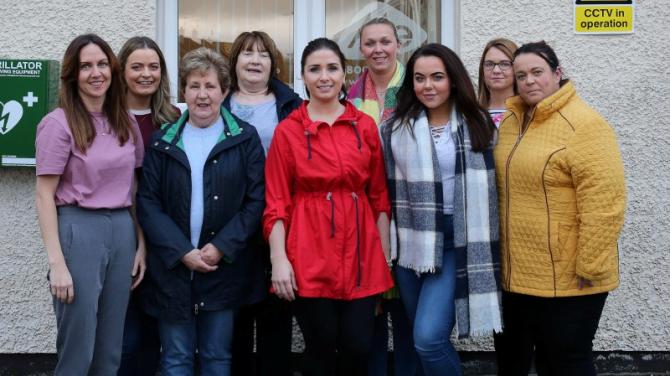 THE ‘Helping the Homeless at Christmas' group in Strabane have launched their 2018 appeal and are encouraging the public to get behind and support them in the run up to the festive season.

The project was initiated last year by seven local women who inspired to help those less fortunate. It has now grown in membership and this year’s group are determined to build on the success of the 2017 campaign.

Roisin Hunter McGlinchey, who is one of the organisers of this year’s event, says the group were ‘overwhelmed’ by the  support of local people – near and far - last year and have taken the new appeal ‘one step further’ by placing trolleys in local shops and supermarkets throughout the winter months.

She explained: “We’re appealing to people who can spare an extra £1 or £2 in their weekly shopping budget between now and Christmas to buy an extra item of food or toiletries and put them in the allocated trolleys.

“We need items with a long shelf life such as pot noddles, tinned/canned foods, cup of soups, biscuits and warm clothing such as hats, scarfs, gloves, coats and thermal underwear – all of which should be new. We’re also seeking toiletries such as toothbrushes, toothpastes and deodorants. These items will make a massive difference to people who are homeless and will help make their Christmas a bit brighter.”

However because the group has grown from seven volunteers to 36, it is now seeking new premises.

Roisin continued: “Unfortunately at the moment we're working out of three different community centres and although we’re very grateful we would ideally like one premise to work out of.

“I would ask anyone who knows of a building or room not being used which they could offer to our team as a base for this years appeal it would be greatly appreciated if you could get in touch.

“Ideally we need a storage space, unit or dry environment to store items we collect for Helping the Homeless before we deliver them to shelters in Derry, Belfast and Dublin.”

The group has also announced a series of fundraising events coming up in the coming weeks and months to aid the case.

First up is a 5K fun run/walk for people of all ages and abilities. Roisin added: “This is a very good way for people to exercise and meet other people living in the community.

“Those involved will also be giving something back to those less fortunate than ourselves and we would encourage everyone to come along and support us.”

The event will take place at Lisnafin Community Centre on Saturday, November 10, at 11am and refreshments will be provided. The entry fee is £5 (adult) and £2 (child).

Elsewhere, the group have organised a ‘Night at the Races’ on Saturday, November 17 at 9pm in the Sportsmans Inn, Douglas Bridge.

Everyone is welcome to come along to both events and all funds raised will go towards the appeal.

For more information on this year’s appeal or to become a volunteer visit www.facebook.com/Helping-The-Homeless