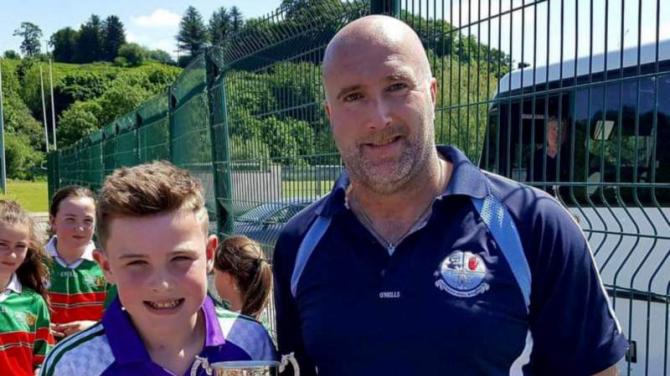 A LOCAL GAA stalwart has been hailed an O’Neills Sideline Hero for going to extraordinary lengths to help others during the coronavirus lockdown.

As well as delivering food parcels with Strabane Community Project since the COVID-19 crisis began in March, Strabane Sigersons' Liam Sweeney played a vital part in raising an enormous £22,000 for two local charities, earning him a nomination for the award from his Sigersons clubmates.

The locally-based sportswear giant ran a campaign on its social media channels during June to pay tribute to all those volunteers who have gone above and beyond in their efforts to help others during the global pandemic.

Hundreds of worthy individuals were nominated on the O’Neills Sideline Heroes website, with inspiring stories of people all around the world assisting others less fortunate navigate this frightening and unknown time with practical help as well as emotional support.

Liam, who is chairperson of the Strabane club, said he is delighted to have received the accolade.

“I don’t do what I do for recognition, I do it for the love of my town and to help people who need help and I’m thankful I’m able to do it," he said.

"When I’m out delivering food parcels, it’s so rewarding because some of the elderly who receive them don’t see anyone else and they’re so glad to get a chat. That makes it all worthwhile for me.

“The Sigersons Solo Strabane fundraiser was a very emotional day, with some of the children from Knockavoe School taking part.

"I’ve been involved with the club for 42 or 43 years, I’ve played in county finals, but for me that was the best day ever and the amount raised was fantastic because they are two very good causes.

“It’s nice to know that I’m a finalist in the O’Neills Sideline Hero campaign.”

Strabane Sigersons club was thrilled that Liam was named a finalist.

The club's Aodhán Harkin said: “Liam is our current chairperson but he has been involved with the club for more than 40 years, playing, managing and coaching as well as serving as treasurer and now chairman.

"As soon as the COVID-19 crisis hit, he was there playing his part delivering food parcels and he also took the lead in the Sigersons Solo Strabane fundraiser.

"It took about six or seven hours soloing a ball through every street in Strabane one beautiful Sunday in June but it raised £22,000 for Knockavoe School and the Koram Centre. Liam is a passionate club man and through the crisis, he really stepped up.”

Liam was one of three runners-up who each receive a £150 voucher for O’Neills.

Clubs were delighted to get the opportunity to reward those unsung heroes who stepped up to the mark, encouraged by social media appeals by O’Neills ‘One Team’. Ambassadors for the campaign included some high profile Irish sports stars including Donegal GAA captain Michael Murphy, Tyrone GAA legend Peter Canavan and Ireland cricket captain Andrew Balbirnie.

Kieran Kennedy, managing director of O'Neills Irish International Sports Company Ltd said: “Congratulations to Liam and all the other finalists who are all worthy winners.

"The response to O’Neills Sideline Heroes campaign has been phenomenal, demonstrating just how dedicated sports club volunteers are to their communities and living out the O’Neills ‘One Team’ mantra where loyalty, flexibility, commitment and passion are paramount.

“The pandemic has turned so many people’s lives upside down and we wanted to do something to show that the good deeds done by so many people have not gone unnoticed.

“Now that clubs are beginning to get back to doing what they love, we’ll all remember this exceptional time and the exceptional people like Liam who made a difference to the lives of those around them, the Sideline Heroes won’t be forgotten.”

O’Neills has endured challenges since the world went into lockdown more than three months ago but the staff has put in a trojan effort to transform its production line from sportswear to scrubs, making a vital contribution in the fight to combat COVID-19.