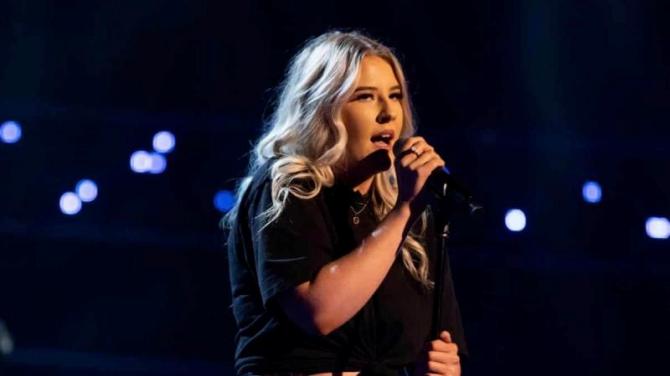 Darci Wilders was watched by millions of viewers on Saturday night when she delivered a stunning version of the Elvis classic, ‘Can’t Help Falling in Love’ during her ‘blind’ audition on the TV show famed for its red chairs which judges need to turn  for the singer to earn a place in the next round of the competition.

Darci, a well-known talent across Strabane and district, was accompanied to the audition by family members including her dad, Alan – one half of the popular ‘Mr Men’ band - who beamed with pride from the side of the stage with judge Emma Willis. She was the first contestant on Saturday night’s show to take to the stage.

Speaking ahead of taking to the stage, the 18-year-old student admitted to feeling “a wee bit nervous” but there was no sign of nerves, when the Strabane lass delivered her own unique take on the song – to the delight of the audience and judges winning her way through to the next round.

Explaining her song choice, she continued: “I’m so nervous because it’s such a big song and I’m putting my own twist on it.

“It’s such a huge artist who sings it as well. I just feel that all the greatest hits are from back in the day and hopefully it pays off.

“I just want to perform and be like my daddy and my mummy because they are happy. We may not be really rich, but we’re really happy.”

Growing up in a musical family, the local girl says she was always destined to be a performer.

“I grew up with a really musical family. People call us the Von Trapp family. It’s just in our genes really to.

“I was five years old when I properly started entering competitions in my hometown.”

Equally nervous and watching from the sidelines, dad Alan said he was “so, so proud” of his daughter.

“When Darci walks out on stage my heart’s going to be pounding and I’m going to try my best not to cry,” he said.

However, a comforting ‘thumbs-up’ from her dad was enough to settle the nerves for Darci as she faced the four big red chairs hoping that one of the judges; Tom Jones, Ollie Murs, Will.i.am or Meghan Trainor, would turn for her.

“I do get nervous… I need to see daddy because he always calms me down. He always gives me the thumbs-up.

Delivering her spine-tingling version of her song of choice, the Strabane girl need not have worried as the judges were visibly impressed with her dulcet tones with Meghan Trainor especially impressed declaring: “That’s how I sing it.”

The US singer was so impressed that she pushed her buzzer and turned to face Darci and as she was the only judge to turn, it means she is now on ‘Team Meghan’.

Overcome with happiness, the judge rushed to the stage to comfort the 18-year-old telling her: “I sing that song and I sing it in the same riff…. You remind me of me but you’re so much better. Wow!”

Asked by Ollie why she had chosen the song, Darci told the star panel: “I’m really into the old classics and I wouldn’t really be a modern music person. It’s weird for my age but I just like to make things my own.”

The former X Factor contestant told the former Holy Cross College pupil that she had delivered an “absolutely stunning” audition.

Welsh legend, Tom Jones was left ruing a missed opportunity, conceding: “I should have turned. I was thinking about it honestly….beautiful and you did a wonderful job and I love that song.”

When it came to Meghan’s turn to critique, she was full of praise for her new recruit.

“We’re going to be amazing and I’m going to take you so far. I can’t wait,” she told Darci.

With the audition over and the local girl leaving the stage, Meghan could barely contain her enthusiasm telling her fellow judges: “She’s amazing right? I used to cover that song and play it on my ukulele.

“I would do that same riff that she was doing to change it up and I was like, oh my God I have to turn around. I couldn’t let her go.”

Darci will now go forward to the ‘battle’ stages of the hit talent show where the coaches pit their singers against each other in front of a live studio audience.

Each coach will have to reduce their team by half to take six singers through to the knockout stage of the contest.

Speaking after her audition aired to millions of viewers, the talented local lass said: “This has been something I’ve wanted to experience from a very young age and I honestly never thought I could do it in the end.

“I’m so grateful to have the most supportive and talented family who have really pushed me to get where I am today.

“I just can’t thank everyone enough for all of the lovely comments and support; you have all made this amazing experience even more amazing. Thank you!”

The Voice UK continues on Saturday night at 8.30pm with the battle stages expected to air in the coming weeks.