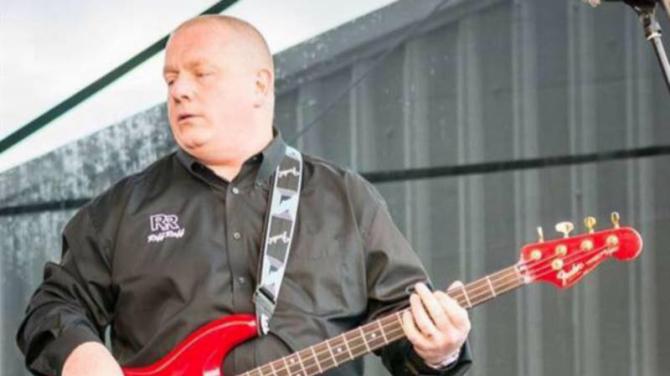 A SION Mills entertainer is celebrating three decades in the music business.

For 30 years John Allen has been a popular and well-known name in the music and entertainment scene performing in numerous venues across Northern Ireland.

He plays both as a solo act and as a member of local band, ‘Rift Raff 2’, as a singer and bass player.

For the local man his passion for music began when he was just 15-years-old when he decided to teach himself how to play the guitar.

He recalled: “I’ve been playing in bands since I was seventeen as a singer and bass player. I also started performing as a solo act from 2001 as well as part of a band. I now have my own band and continue to play regularly around the country. I’ve performed in London, Cork, Kildare and Scotland to name but a few places.

“It all started back in 1986 when I decided to learn to play a bit of guitar. There was a concert of Chris De Burgh in the Kings Hall on TV. I always remember the guitar player during the song ‘Borderline’ and there was a lovely guitar solo. He was playing a Fender Stratocaster and that was me hooked.

“I was 15 at the time and I didn’t take lessons as such – I was more or less self-taught.”

“I would have sang but there was nobody to play bass guitar. Someone had actually given me a bass guitar and I ended up becoming a bass player through necessity. I’ve been playing the bass ever since. Last Orders consisted of myself, Jeff McGinley, Gary Nelson and Derek Mullen. Our first gig was probably in 1989 and we were together for around two years.

“A few people left and a band arose out of that called Aces High which lasted about a year. We would have been doing the local scene, weddings and bars – anywhere we could. That band fell away. I was out of a band briefly and then got a job with local band called The Silvetones, which is a family based group in Sion Mills, in late 1990/early 1991. They were well established and well-known around the area at that time,” he added.

“That band consisted of Tommy Colhoun and his brother Ossie and Tommy’s two sons. I played bass with them and I was with them until New Years Eve 2001. I felt I wanted to do something different at that stage and ended up going out on my own and I still do the solo work now.”

John continued: “Davy left in July 2017 to pursue other things and I managed to talk Marcus Colhoun from The Silvertones back out of retirement again so he came back to play guitar and a young fella called Callum Lucas, who at the time was only 17, came into the band to play acoustic and sing.

“We changed the name to Rift Raff 2. Andy decided he was going to leave at New Year that year and we brought young Ossie Colhoun back to drum again. It ended up that it was two of the previous members of The Silvertones who came out of retirement to play again and that’s the current line –up.”

The band currently play across the province taking in venues in Portstewart, Dungannon and Omagh to name a few.

“It’s busy especially with me doing the solo work as well but I enjoy it. I’m doing it so long that if I’m not doing it, I’m lost. I’m basically getting to do my hobby as a job.

“There have been a lot of changes in the 30 years and many people have moved on. The times have have also changed and peoples’ habits of how they go out have also changed but live music is still very popular, especially in Ireland where there is a great music scene.

“In the early days on a Saturday you might have played a wedding and been finished at 6.30pm and then gone somewhere else to play. The bars have definitely got a lot quieter. I enjoy it every bit as I did 30 years ago when I started out; it’s just slightly different.

Reflecting on back over the 30 years, John says there have been many highlights but too many to hand-pick.

“We have done various things over the years including playing the main stage at Dergfest a couple of years as well as support work in the River Club for Irish country bands in the early days. I was also asked to play at family friend’s wedding in London which was lovely to do.

“It’s been quite varied and it’s all been fun. There’s nothing I could say was the biggest highlight. My time with The Silvetones, I enjoyed very much. They treated me very much like one of their family and I made great friends which have stood the test of time,” he said.

Asked what the secret to longevity is, John says it’s all about ensuring that you play to your audience.

“The current line-up of Rift Raff 2 is constantly learning new songs out of the charts plus a lot of the classics. We try to keep it varied. We do everything; country, up-to-date pop, classics and a wee bit of rock. It’s mportant to play what the audience want to hear not necessarily what you want to play.

“You do try to indulge yourself at times but it’s more important to keep your audience happy. Does it feel likle 30 years? Not at all. I have a real love for music and I can’t see that slowing down anytime soon.”