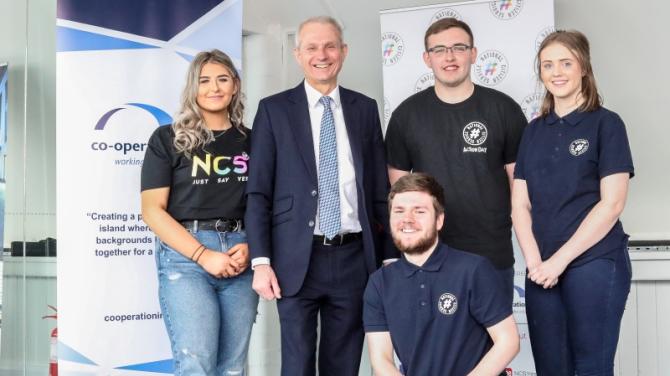 A GROUP of young people from West Tyrone, including teenagers from the Sion Mills and Ballymagorry areas, have met with a senior government minister to discuss their participation in a life-changing programme for teenagers.

Jordan McKee (19) and Amy Patton (17), both from Sion Mills, joined Jonathan Hogg (19), from Ballymagorry, and Omagh teen, Ceri Nesbitt (18), for the special meeting with minister for the Cabinet Office and de-facto deputy Prime Minister, David Lidington on Friday when he visited the offices of peace building charity Co-operation Ireland in Belfast.

During the meeting, the group told the minister about the cross-community work they have carried out as participants on the National Citizen Service (NCS) programme, for which Co-operation Ireland is lead partner in Northern Ireland, and how it has benefited both them and their respective communities.

NCS is a personal development programme that builds skills for life and work. Social action projects are at the core of the programme with participants volunteering in the community. It is funded by the Department for Communities (DfC).

Speaking of how taking part in the programme had helped him, Jordan explained: “I got involved in NCS because I knew a friend that did it the year before me and they said it was one of the best experiences they ever had.

“NCS made me feel more confident when working with groups and making friends with people I didn’t know before hand.

“I’ve kept involved with NCS since 2017 and it’s been extremely beneficial to me as I feel like I’m able to make a difference in Northern Ireland and hopefully the whole of the UK someday.”

Minister Lidington heard about projects the young people had undertaken to foster community relations in the Omagh area and how they were successful in breaking down barriers between communities.

Afterwards, he described the young people as “inspiring” adding: “There was an enthusiastic message from the young people I met that NCS had transformed their own self-confidence and broken down barriers between different communities.”

Welcoming minister Lidington’s visit, Co-operation Ireland’s chairman Dr Christopher Moran said he was pleased the senior member of the cabinet was able to see the good work being carried out on the ground.

“I am delighted that minister Lidington was able to visit the important work of Co-operation Ireland as it builds peace within youth communities in Northern Ireland,” he added.

NCS is a life-changing programme open to all teenagers aged 15-17 to discover who they are and what they can do. Over 500,000 young people have taken part in the programme across the UK.

For more information on the NCS programme visit www.cooperationireland.org/ncs