Exhibition exploring impact of 'the Troubles' opens in Alley Theatre 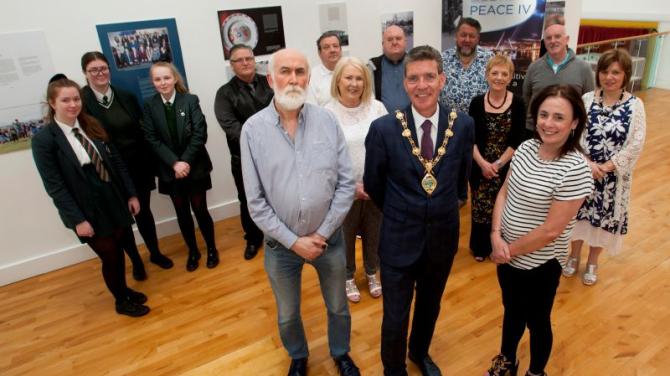 A POWERFUL inclusive exhibition exploring the profound impact of the Troubles on individual lives is now showing at the Alley Theatre.

Organised by Towards Understanding and Healing, the great success of the exhibition, which was previously on display at the Holywell DiverseCity Community Partnership in Derry City throughout 2018, has led to its expansion.

The exhibition now features contributions from over 40 people whose individual stories are accompanied by an image selected by each storyteller that, according to exhibition organiser, Eamonn Baker “serves to mirror their words”.

Mr Baker describes the exhibition as a “kaleidoscope of heartache and resilience”.

He added: “This process has been deeply moving. I have been privileged to hear sometimes heartbreaking stories from people from widely diverse community back grounds.

“Suffering has been universal. Few, if any, have escaped.

“We are very grateful to all our contributors, young and old, who have bravely shared their stories.”

One of the contributors is Mark Olphert who was 12 years old when his father, John, was shot dead at his shop in 1983.

A section of his ‘200 Words’ reads: “Later, my older brother Peter mopped up my father’s blood at the doorway of the shop.

“One day from the school bus, I could see scrawled on a wall the graffiti: ‘John Olphert Ha ha ha.’ The next time we passed there, the graffiti was gone.”

Another participant, now living in Strabane, recalls the day her mother uprooted her and most of the family from west Belfast escaping the Troubles and moving to London.

She speaks of her homesickness in this new confusing, alien world.

Another Strabane contributor speaks eloquently of how the “abnormal became normal” as politically motivated violence invaded our streets.

The ‘200 Words and One Picture’ exhibition will run for a number of weeks concluding on Friday, June 7.

Towards Understanding and Healing is a project supported by the European Union’s PEACE IV Programme, managed by the Special EU Programmes Body (SEUPB) and the Department of Foreign Affairs (ROI)