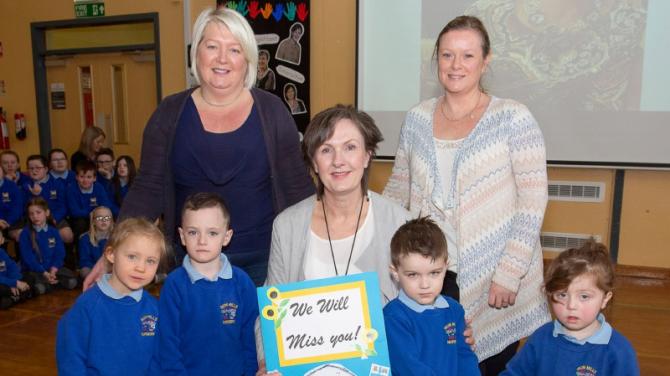 ON Friday, the parents, governors, staff and pupils at Sion Mills Primary School bid a fond farewell to a much loved, highly respected and loyal member of staff.

Mrs Ann Maguire retired from her post as nursery teacher after 33 years in that role. Not only is this a long span of years but Mrs Maguire has been the only nursery teacher Sion Mills Primary School has had until now.

School principal, Oonagh McNelis explained: “Mrs Maguire developed the nursery from the pre-school area that opened in 1986 to the vibrant, colourful, busy learning area both inside and outside that it has now become.

“By some calculations approximately 1,600 children have spent the first year of their education in her capable hands. There, they were gradually introduced to the routines of a play-based educational experience which left them well prepared for the next stage of their foundation education in primary one.

On Friday, her retirement day, the current pupils, including nursery, hosted a special assembly to celebrate and share some memories of their time in Mrs Maguire’s class.

The classes and school choir performed songs and poems, shared memories of their nursery years and the assembly culminated with a dramatic poem based on key moments in the daily life of Sion Mills Nursery, performed by primary seven pupils.

Following the children’s performance, Tom Bradley, chair of Board of Governors paid tribute to Mrs Maguire’s commitment and skill as a teacher.

He commented that he had first-hand knowledge of her work as his daughter was one of her very first pupils in 1986. Mr Bradley presented Mrs Maguire with a gift from the parents, past and present.

It was fitting that Mrs Edel McMullan, who is now a parent representative on the Board of Governors, and was also one of that first group of nursery pupils, presented Mrs Maguire with a bouquet of flowers on behalf of the governors.

The current nursery class supported by Mrs Karen Harkness and Mrs Alison McCosker presented Mrs Maguire with gifts. Mrs Kee, who has been a colleague of Mrs Maguire for 33 years, presented a gift from the staff.

In her opening remarks Mrs McNelis stated that Mrs Maguire’s input into the life and development of Sion Mills Primary School cannot be overstated and she will be greatly missed.

Quoting Lao Tzu, who said: “The journey of a thousand miles begins with one step,” Mrs McNelis thanked Mrs Maguire for the commitment and thoughtfulness she gave to that important first step on their educational journey for so many children in this locality.

She wished Mrs Maguire a happy transition into the next stage of her life story and many years to enjoy it with family and friends.