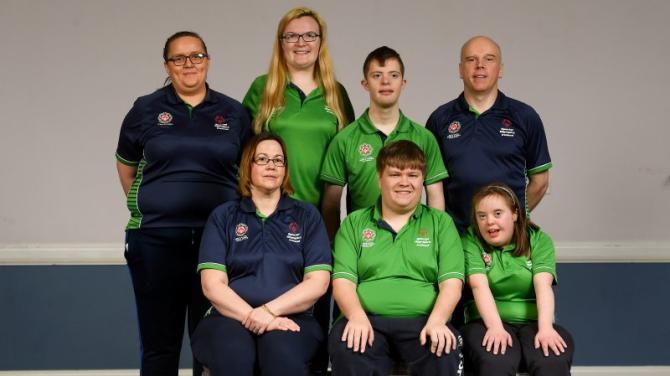 A STRABANE woman is among four athletes from Co Tyrone who have travelled this week to Abu Dhabi to compete in the 2019 Special Olympics World Summer Games.

Talented basketball player, Siobhan McCay, who has been involved in the sport for over 12 years and is a player with the North West Special Olympics Club, based in Letterkenny, is among the 91-strong Team Ireland Squad.

Speaking to the Strabane Weekly News last year after winning gold at the All-Ireland Games in Dublin, thus confirming her selection for the World Games, Siobhan commented that the competition is the pinnacle moment in her athletic career.

“It felt absolutely surreal, it was like a dream come true and I know that sounds cliché but that's how I felt. Even playing for Ulster was a massive achievement in itself never mind scoring and winning gold. For a few years, it seemed like it would never happen because I was always so many points behind and then to actually be chosen to represent Ireland after my name was pulled out of a hat was amazing.

“I received my medal on Father's Day and I gave my step-father, Tommy the biggest hug ever. The next day was actually my birthday as well so it was the best birthday present ever,” she said.

A month later Siobhan got the call-up for Ireland adding:“I would like to thank everyone from the Special Olympic teams in Letterkenny and Strabane for all that they've done.

“I’d especially like to thank my coach Bill (McIntyre), my mum, Margaret, step-father, Tommy and my friends for always believing in me. I hope everyone in Strabane will get behind and support me.”

Donegal was also be well represented at the games with Convoy’s Leon McDaid, a basketball player and also a member of North West Special Olympics Club, involved. He said it was his “life dream” to represent his country in the competition.

The Team Ireland athletes began their journey to Abu Dhabi ahead of the 2019 Special Olympics World Summer Games on Friday. Excitement was in the air at Dublin Airport as athletes from across Ireland boarded their flight, with dreams of success in their various sports.

Taking place between March 14 to 21, Abu Dhabi 2019 will be the largest sporting and humanitarian event in the world this year. Supported by a volunteer management team of 39, the 91-strong Team Ireland includes 21 athletes from the Ulster region and will join 7,000 Special Olympics athletes from 170 countries at the games.

With 350 family and friends also making the trip to support their loved ones, Ireland is set to be one of the best supported nations at the games. Second only to the United States, this wealth of encouragement is certain to give Team Ireland the edge as they step up to compete.

The opening ceremony, which will take place at Abu Dhabi’s Zayed Sports City Stadium tomorrow (Thursday), is set to be a spectacular celebration of humanity at its best.

More than 40,000 spectators will witness 170 nations take place in a celebratory parade, with the athletes being accompanied by a number of international celebrities including singer and Special Olympics Global Ambassador, Nicole Scherzinger.

Shaun Cassidy, is regional director of Special Olympics Ulster. He said: "It is wonderful to see so many of our local athletes being selected to represent Team Ireland at the Special Olympics World Summer Games. Since LA2015, we have increased the number of Team Ireland athletes from the Ulster region from 12 to 21 athletes and we are extremely proud of the hard work and determination displayed in their preparations to represent Team Ireland on an international stage.

“We feel an immense sense of pride as they depart on the journey of a lifetime to Abu Dhabi and would encourage people across Ulster to join us and get behind our athletes and the whole of Team Ireland over the next few weeks, sharing their well wishes and messages of support on social media."