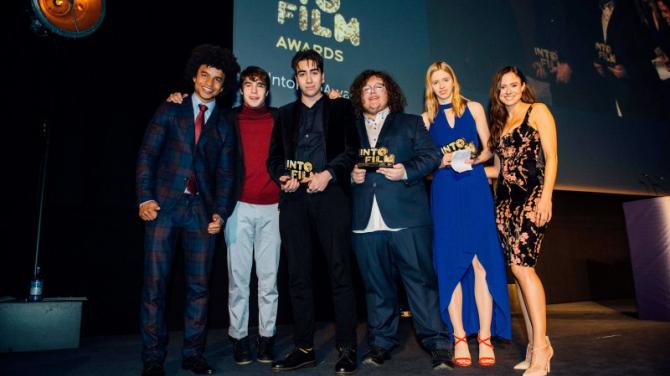 A TEENAGE filmmaker from Strabane has been named ‘One to Watch’ in the prestigious Into Film Awards held in London. Oisín-Tomás Ó Raghallaigh, who is just 18 and is a former pupil of Holy Cross College, will now receive specialist mentoring and support from film education charity Into Film to help him continue to develop his skills.

Speaking of his win, the delighted teen said: “To be picked for a national award like this is such an honour; I think it’s great how Into Film recognises and nurtures young talent. Film and television careers are notoriously difficult to get into, particularly if you are young, don’t have a lot of money or come from an underrepresented community – this award is an equaliser that helps develop new talent.”

The fifth Into Film Awards are the UK’s largest celebration of young people’s creativity in film capturing the true spirit of film and creativity and shining a spotlight on the next generation of filmmaking talent. The judging panel were impressed by Oisín-Tomás’ skill, passion and creativity.

“He has accomplished so much in a short time and we see a bright future ahead for him; we’re delighted that he will get specialist support now that will help develop his career,” said Sean Kelly, from Into Film’s Northern Ireland office.

Oisín-Tomás’ film career is on a steep trajectory as his most recent short film, ‘Hindsight’, has accepted into 22 film festivals, winning multiple awards.

The week before the Into Film Awards he will be travelling to Alabama for the George Lindsey UNA Film Festival in which ‘Hindsight’ is competing in the Best Youth Film category.

Hindsight was created as part of the The BFI Film Academy Craft Residential delivered by the National Film and Television School last spring.

It tells the story of Tony, a convict and drug addict, desperate for a new relationship with his daughter and former partner who must overcome his past temptations and prove he’s finally changed his ways.

“I love writing and producing but my real passion is directing. I’m interested in creating movies with a social message, that address serious issues and give a new voice to people’s stories and experiences,” the budding filmmaker added.

After finishing off his A Levels at Holy Cross College, he decided to take a year off formal education to gain more experience in the film industry.

He’s currently working on ‘Grounding’, a new short film that deals with mental health issues and for which he gained NI Screen support.