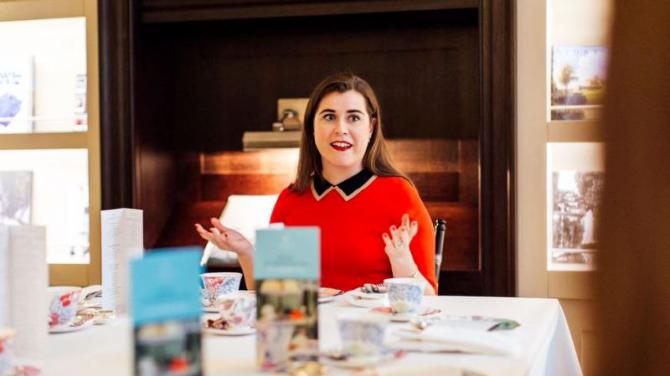 LIFE is like a cup of tea, it's all in how you make it....and for Strabane woman, Eileen Donaghey, that is certainly true.

She has turned her passion for afternoon tea into a bespoke business model – Afternoon Tea Expert.

Having just returned from London and now based in Belfast, the local lady is planning to grow her business and host a number of blogging events.

Eileen is a past pupil of the old Convent Grammar School and later went to Queen’s University to study English and Linguistics.

It was a broad degree which allowed her to go into the world of marketing. She then took on several professional marketing qualifications and is the communications ambassador for the Chartered Institute of Marketing in Ireland.

When she was 24, she moved to London and began working for a publishing house. Staying in the professional services world of work meant that there was limited need for social media so in order to keep on top of her marketing skills Eileen decided to set up an Instagram account as a hobby.

She combined her new social media presence with her love for afternoon teas and the venture soon began brewing up a storm in the blogging world. She was inundated with requests from other afternoon tea enthusiasts and tourists keen to hear her experiences and recommendations.

Speaking to the Strabane Weekly News, Eileen explained: “Being new to London I thought it would be a good way of exploring the city by taking photographs of different afternoon teas that it has to offer. It was also a good way to treat family and friends visiting London and I was able to photograph the afternoon tea while I was there.

“The Instagram account originally began as a hobby but as it grew, so did the interest from tourists asking where to go in London and the number of followers began to increase. Afternoon tea can be expensive and unable to afford to spend money weekly in order to take photos, I improvised by taking photographs of tea and cakes at home in order to generate photographs and content.”

Soon the invitations to visit from hotels began to come in and Eileen was able to go weekly – sometimes twice a week - to visit different London venues and sample their afternoon tea.

Eileen kept the Instagram as a hobby until last year when she left her job and moved back to Northern Ireland and has devoted more time to growing the business.

She recently finished the Ulster Bank Pre-accelerator Programme were she won the pitching competition against other start-ups. Last year, the website www.afternoonteaexpert.co.uk launched along with an event series and private tuition events.

Few would believe that you could take a class in afternoon tea but Eileen has already had a client from as far away as Vancouver. Since then Eileen has been testing her events in London and has plans to bring them to Northern Ireland this year.

Asked what makes her blogging presence so successful, she continued: “Blogging isn’t easy and the account has been around since 2014 so it has been a long time in the making. It takes hard work and daily effort in order to grow it, source content and improve it. There’s also only so many cakes you can eat in a week.”

What makes the page different from others is that Eileen remains very honest with where she recommends.

“Most people ask me for recommendations for special occasions like Mother’s Day or a significant birthday. I would hate to know someone was spending money on somewhere mediocre just because I was being paid to tell them to go there.,” she added.

There are a few places she recommends and treats each enquiry as an individual thinking of where would be best for them to go.

“The blogging has taken a different direction with the events. Since afternoon tea is such a sociable affair it makes sense to have tea with others rather than sit at home posting photographs alone,” she said.

For the budding entrepreneur it’s a “fantastic feeling” to host blogging events and to be able to share knowledge with so many people from around the world all interested in afternoon tea.

So, what makes the perfect afternoon tea? When Eileen judges an afternoon tea, she breaks it down and looks for four key points; food quality, atmosphere, service and value for money.

“Each afternoon tea is different and by using this scale a £20 afternoon tea can be just as good as a £60 afternoon tea. The most important element I look for is food quality and is known to have high standards! Finding the perfect place for you really depends on the occasion, you wouldn’t bring your mother to the same place as you would bring your girlfriend. With afternoon tea growing and becoming more popular, there is so much choice now in the North West,” she added.

“Being based in Belfast gives me more opportunity to travel around Ireland and sample some of the afternoon tea Ireland has to offer. There are also so many amazing opportunities and funding for start-up businesses that you wouldn’t find in London.”

There are also quite a lot of tea courses which Eileen has her eye on in 2019 as soon as she has enough funds. She is working hard towards having some new surprises for ‘National Afternoon Tea Week’ in August (yes, there’s a full week dedicated to afternoon tea) and ‘National Tea Day’ April 21 –  which just so happens to be her mother’s birthday!

To launch the events in Northern Ireland, Eileen is hosting a special afternoon tea party for bloggers in Derry on Sunday, February 24. The event will be held in the 5-star Bishops Gate Hotel and all the bloggers who attend will receive a special goody bag.  One part of the goody bag that can be revealed is a special treat from Green Angel Skincare!

Eileen explained: “The bloggers will be taught the history of afternoon tea, some tea drinking tips and of course some basic afternoon tea etiquette. It is also an opportunity to meet other bloggers and talk to each other about social media and blogging in the North West.”

Tickets can be bought via www.afternoonteaexpert.co.uk or via Facebook @AfternoonteaLondon