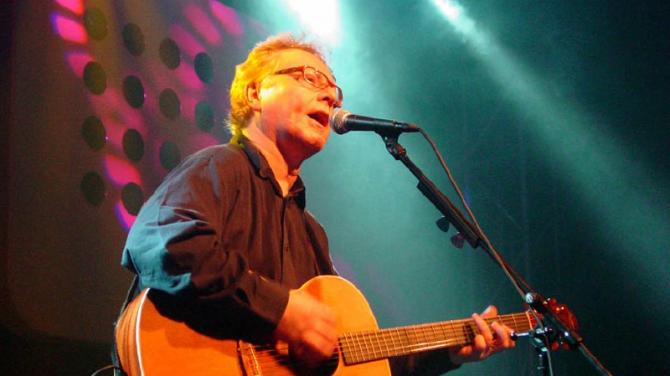 STRABANE-born musician Paul Brady will return to the town next month to play a sold-out benefit gig in aid of The Koram Centre.

The singer and songwriter – who now lives in Dublin – was unveiled as the mental health charity’s patron last year. He will perform at the Alley Theatre on Saturday, February 2.

It will be Mr Brady’s first gig of 2019 and tickets were swiftly snapped up when they went on general sale. The gig is a sell-out with a waiting list now only available.

Looking ahead to his homecoming concert, the musical statesman recently ‘tweeted’: “My first date in 2019 after I get back from New Zealand is on February 2 in the Alley Theatre in my home town, Strabane.

“It's a fundraiser for the Koram Centre counselling service of which I recently became a patron. Come on down!”

With a career spanning five decades, Paul is one of contemporary music’s most enduringly popular artists. He first came to attention as a teenager at college in the mid ‘60s in a series of classic Dublin rock/soul bands.

The worldwide folk boom of the time produced seminal groups like The Clancy Brothers, the Dubliners, Clannad and The Johnstons, with Paul soon joining the latter.

He recorded seven albums with the Johnstons and moved to London, then the USA, before returning to Dublin in 1974 to join premier Irish folk band, Planxty.

Speaking to the Strabane Weekly News when he took up the role of patron last year, the local musician said he was impressed by the remit of the Koram Centre - which offers professional therapeutic intervention and psychosocial support to clients.

Speaking at the time, Mr Brady said he was ‘delighted’ to be asked to become patron of the charity and vowed to use his public profile to bring media attention to the centre and ensure that more people are aware of the great work going on in what he has described as ‘an extraordinary place’.

His enduring work is recognised as having a universal impact – including open and honest songs of pain, loss and anxiety – and he believes that the Koram Centre is an excellent charity addressing such emotions and importantly promoting positive mental health.

The Koram Centre is also delighted by Paul’s commitment to the charity and grateful for his ongoing support.

A spokesperson said: “We are delighted by the commitment of Paul to our charity and we’re very grateful for all his support. Mr Brady’s work is recognised as having international impact with songs demonstrating his empathy with many of the emotions dealt with by the centre.

“Paul also recognises that mental health is often not spoke of but ‘everyone is forced to confront themselves from time to time’.”

The concert will take place on Saturday, February 2, at 8pm and support will come from other local artists, Paul Tully and Shonagh Forbes

For further information on the show, contact the Alley Theatre Box Office on 028 71384444 or visit www.alley-theatre.com