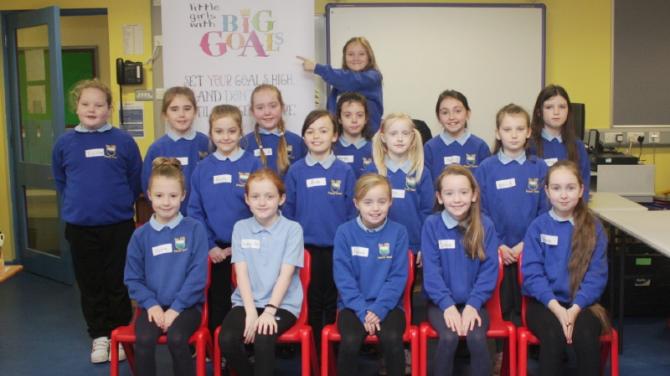 Nicky and Nicole, who both work for the computer company completed a small project with the primary five girls in Sion Mills Primary School.

A school spokesperson said: “The pupils have discovered that Allstate is an American company based in Strabane, Derry and Belfast.

“During the project Nicky and Nicole read us stories about ‘Great Women who Changed the World’ like Agent Fifi, Rosa Parks, Amelia Earhart and Jane Austen, for example. Then we did fun activities connected to their lives.”

When talking to some of the primary five girls about the project, Leah C and Hannah said the project was “to show us, at a young age, that you can be anything you want to be as long as you are happy. You could be the world’s most famous footballer, F1 racing driver, builder or farmer.”

Holly and Leah B added: “If you believe in something and it doesn’t work first, or even second time, to believe in yourself anyway, keep trying and it would work out.”

Katie and Molly stated: “Women and girls can do whatever they want and not to think that boys might be better at it. For example, footballers, authors, pilots, bus drivers, swimmers etc.”

The school spokesperson added: “It was a great fun project that started a conversation with the primary fives about what they might like to do in later life.

“It also helped the girls realise that they unconsciously had made up their minds about roles even at nine or ten.”