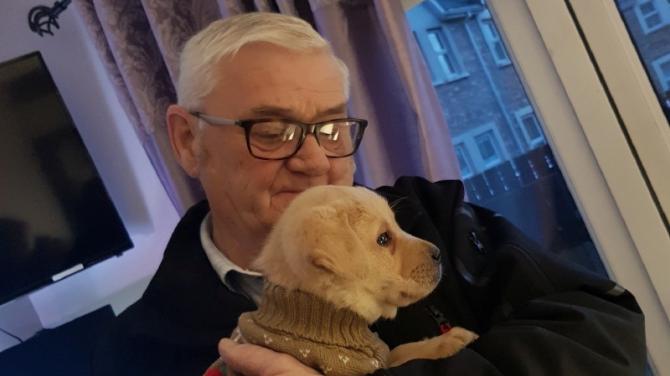 A VIDEO showing the heart-warming moment a grieving grandfather is introduced to his new puppy has gone viral.

At the time of going to press yesterday (Wednesday), the touching moment – captured by Paddy O’Goan’s granddaughter – had amassed over 4.2 millions views on Twitter.

The Strabane pensioner (68) was presented with his new furry friend ‘Buddy’ on Christmas Eve and the video, taken by his granddaughter Sophie Roulston, was subsequently posted online.

The video shows the precious moment when the excited little Labrador puppy brings new joy into the life of the recently bereaved widower.

A retired former coalman, Mr O’Goan and his family are well-known in the Strabane area.

His wife Marian passed away just a month ago. They had been married for 50 years.

Keen to bring happiness to her grandad following a difficult few months, caring Sophie searched high and low until she discovered little Buddy.

Captioning the video, Sophie explained: “Granda’s dog died a few months back and he asked nanny to let him get another one.

“Nanny passed away a month ago and has been so lost since.

“We surprised him with a pup for Christmas and he is so in love already. He (granda) is so precious and deserves the world.”

The video has attracted millions of fews, thousands of likes and retweets on the social media platform with many all keen for updates on the new friendship.

Scores of comments of goodwill have also been posted to Sophie’s Twitter channel in what has become one of the most heart-warming of stories this festive period.