Help those less fortunate this Christmas with 'Strabanta Cause' gift appeal 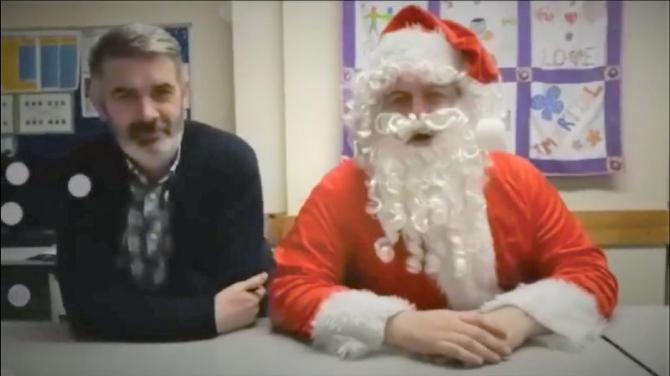 A FESTIVE gift appeal – with a comedic twist – has been launched in the town this week to help alleviate the burden on hard pressed families this Christmas.

‘The Strabanter – Party Page’ on Facebook, set-up by childhood friends Anthony Duffy and Ronan Boyle earlier this year, has created ‘The Strabanta Cause- Christmas Gift Appeal’ for children in need of a toy this year.

Teaming up with Melmount Community Forum with the help of a few other notable Strabane personalities including Tommy Canning, Niall Blee and Wez Devine, the comedic duo are asking locals to dig deep to help make Christmas special for others this year.

A video explaining the rationale behind the appeal has been posted to the Facebook page with Strabane’s own ‘Strabanter Claus’ making a guest appearance.

The video has been viewed already over 9,000 times since it was posted on Sunday and it has been shared hundreds of times.

Tommy Canning explained: “Strabanter Claus has come up with a great idea. It’s a tough time of the year so we’re asking people who have a wee bit more to give some to those who have a little less. So, can you buy a present for a boy or a girl out of your own money? Leave it at Melmount Forum Offices (above Vivo shop, Ballycolman) between 9.30am and 4.30pm.

“After three weeks, we will see what we have and we'll donate it. How we will do that is that for anyone who is reading or watching this, they can send a private message to the Strabanter page with their details.

“We will anonymously deliver the presents so nobody will know who got what. Strabane, put your best foot forward again and help those who are struggling and suffering a wee bit at this time of the year.”

Ronan (Strabanter Claus) said all messages will be treated in strict confidence.

He added: “Any presents – big or small – it doesn’t matter. We will stockpile them here and give them out to boys and girls whose families are struggling during this time of year. If you live outside the town, you can buy a toy in Argos, send us the number and we can collect it.”

The kind-hearted initiative follows on from the incredible success of the ‘Ballycolman Games’ video which was posted to the same Facebook page last week.

The video depicts ‘Strabatman’ (Anthony) and ‘Robo’ (Ronan) as they embark on an epic battles of games that they played as children in the ‘80s.

Created in aid of the Koram Centre and in memory of the pair’s late friend, John Lynch, ‘Ballycolman Games: The Movies’ has gone viral, attracting thousands of views by more importantly, raising – to date – £5,430 for the town’s mental health charity.

To see the Christmas appeal’s hilarious video in its entirety, to watch the antics of the comedic duo and for further details on the initiative search ‘The Strabanter – Party Page’ on Facebook.

You can also still donate to the fundraiser for the Koramn Centre by logging onto justgiving.com and searching for ‘Ballycolman Games’.